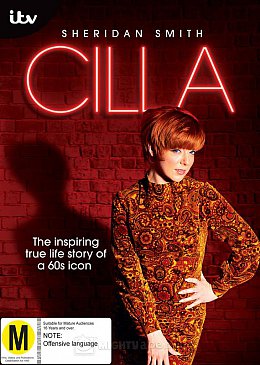 For a film with a number of parallel threads and themes competing for attention – the rise of Liverpool singer Cilla Black to fame in the mid Sixties; her relationships with gay manager Brian Epstein (and his rough trade life) and partner Bobby Willis (an aspiring songwriter and singer himself); the Protestant-Catholic divide in the city and so on – this two-hour plus bio-pix does a very good job.

As the Beatles exploded, young Cilla White was caught up in the musical excitement of her tough hometown and – after some of the usual setbacks – found herself in Epstein's stable of stars, recording with George Martin and enjoying a series of hit singles.

Alongside that however was her relationship with Bobby – she a Catholic and he with a vehemently anti-Catholic father – who was her first manager, then road manager and partner and, when this film ends with the death of Epstein in '67, he became her longtime manager/husband.

As a friend noted recently, there are very few actors who can portray a Beatle on screen (Ian Hart as the nuggety Lennon in Backbeat a notable exception) because they have become so familiar to us they are almost caricatures. But Cilla Black's few identifying features – teeth, nose and bob hairstyle – mean that as a screen character she is rather more easy to occupy.

Consider here the first sighting of “Ringo” (got the nose, but too tall) and “Cilla” (well, it could be), and playing the lead Sheridan Smith pulls this portrayal off persuasively.

Much is made of her also singing the Cilla songs which she does extremely well, although errs a little towards showtune and stage style in the lower range where Black was more raw.

Black is on record as saying she found this film hard to watch, and to be sure she is portrayed as ruthlessly pursuing a career at the expense of Bobby, naïve when it came to Epstein's nocturnal proclivities and furious when the hits stopped coming, especially when she failed to crack America in the way many expected she might.

When this film recently screened on New Zealand television it was split over three parts as the makers intended. Seen in a single viewing it may feel a little long, but it stands the telescoping, and the extra is and 18 minute featurette on the making of the film, in which Smith is interviewed with her natural long blonde hair and looking nothing like Cilla Black.

That in part is the magic of the film maker's art and director Whittington – who co-wrote the screenplay for Philomena with Steve Coogan – also offers an authentically rough, bomb-damaged and poverty-ridden Liverpool where this story plays out.

If you missed it on the small screen, this is very well worth a watch. The Liverpool humour comes through with blunt clarity too.