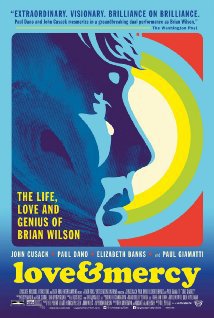 Murray Cammick – whose knowledge about and passion for soul music are not to be questioned – had an interesting criticism of Get On Up, the biographical film of James Brown's life.

The actor playing Brown (Tate Taylor) was too tall, said Cammick. Brown's short stature was what made him the man he was.

Let's not take Cammick to Love And Mercy then, the film about the damaged genius Brian Wilson as played by Paul Dano in those crucial years of creativity between surf songs and Pet Sounds, and John Cusack later when Wilson is in the grip of the possessive, manipulative and downright suffocating Dr Eugene Landy (the excellent Paul Giamatti who brings smiling menace) who controlled Wilson's every waking moment. 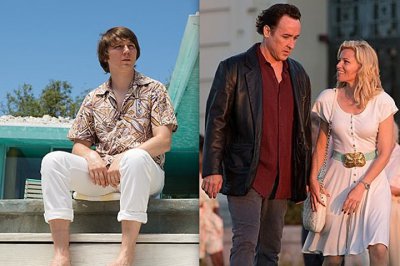 As the film shuffles the deck between these periods you are struck by what a refined and sensitive actor Dano is and how he inhabits Wilson's character (not to say bear more than passing resemblance).

And just how actorly Cusack is.

Where Dano twitches and feels the hurt from inside, Cusack puts it all out on the surface and, not looking much like Wilson or Dano at all, he seems a very odd choice for the role. 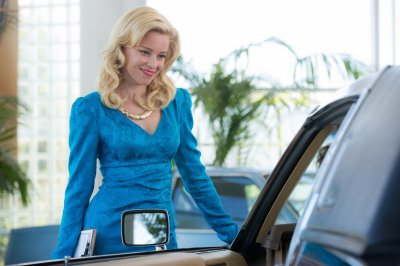 Every time we shift back to Wilson/Cusack as he tentatively works at a relationship with car salesperson Melinda Ledbetter (superbly realised by the luminescent Elizabeth Banks who portrays a woman slowly realising the tragedy at the core of the man) you might have to remind yourself, “Oh, that's Brian Wilson again”.

Quite why Dano didn't play both Brian-then and Brian-later seems strange since it would have added coherence and continuity to what is otherwise a compelling film.

Love And Mercy doesn't flinch from the well-publicised story of Wilson's breakdown, abusive father Murry (Bill Camp) and the struggle for control of the Beach Boys career between the visionary Wilson and the reactionary Mike Love (Jake Abel).

Central however, as it should be, is the music (BBs original songs and Dano) . . . and most especially the music in Wilson's increasingly confused head which comes as increasingly spaced-out, disturbing cut-ups and fragments of BB songs and voices as Wilson grapples with his sliding sanity. It's like a mad version of the Beatles' Love album and I'd pay to have these sounds just by themselves.

A compelling scene is at a dinner table where the noise of the cutlery becomes increasingly loud and aggressive, and Wilson cracks.

The counterpoint to that is when we see Wilson in the studio with the Wrecking Crew who are impressed by the young genius, and as Hal Blaine (Johny Sneed) observes, they've worked with Sinatra and Spector. 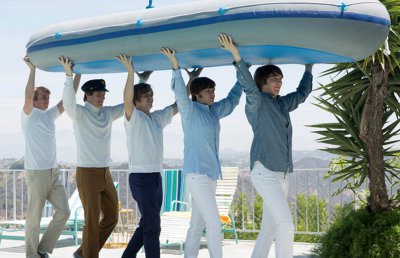 These were the days of very good vibrations.

But the scenes where Wilson is with Landy, Murry and Love are very disturbing indeed.

The problem with films about people who are still living is where to draw the ending, and in this case it closes with Wilson freed from the clutches of Landy.

Those who know the subsequent story will not see this as an especially happy ending, Wilson continued to suffer from extreme bouts of mental instability and when I met him in the mid 2000s (that story is here) he had yet another minder, Jerry Weiss whose role seemed a little ill-defined but he – as did Landy – was apparently writing songs with Brian. He certainly was more than a minder as he sat in the audience and “conducted” Wilson through the concert.

The happier ending however is that Wilson married Ledbetter and they have adopted five children.

Love and Mercy -- which opens in New Zealand cinemas June 26 and comes out on DVD/Blu-Ray in October -- is a film about Brian Wilson and that creative period in the late Sixties, but also about music and a descent into a mad and bad place where a person is so disturbed they are easy prey for the manipulative.

And it comes with great, and sometimes terrifying, music.

The New Zealand Music Foundation is offering a double pass to Love & Mercy and a Best of The Beach Boys CD to those that make a donation towards their work this month.Head over here for details.

Although it would perhaps be possible to write the plot outline of this modest but quietly impressive feature on a very small piece of paper, the protagonists here and a few of the marginal... > Read more