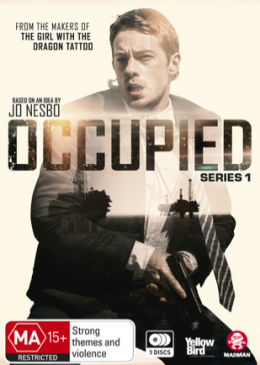 So this is how the end of your freedom begins, not with a zombie invasion or some future described in that cliché “dystopian”.

It begins with the suddenness of an invasion, or an encroachment by stealth.

Either way you wake up and the government you once had is now in the hands of others, those from beyond your borders.

So your democratically elected representatives no longer have control of your country and nor, by extension, do you.

In the 21st century we live in a climate of fear: Our newspapers, television “news” channels and elected representatives feed it. The enemy is out there (or worse, the enemy within) and so certain fundamental freedoms -- just little ones of course, barely perceptible in your daily life – are gradually eroded.

And so that dystopian future -- so beloved of fiction writers and film makers who want to recreate future days in monochrome to drive their obvious point home – arrives.

But in truth we won't be fighting cyborgs, zombies or obvious fascists in tight uniforms redolent of the Nazi era.

If only it were that simple.

This exceptional – if flawed – series from Norway posits another and more likely scenario from the immediate future, a future so close that it looks exactly like the present.

And it is polite, orderly and familiar.

Occupied is set in eco-conscious Norway in a few years time when climate change has become obvious in floods and medium-scale disasters. The elected Green-majority government sticks to its campaign promise and shuts off its gas and oil-export production to launch the more eco-friendly thorium project: it will be clean, green and so on.

But Norway's PM Jesper Berg hasn't counted on the European and Soviet reaction . . . and the EU (of which Norway is not a member) gives tacit approval for the Russians to heavy Norway with the threat of a stealthy but unequivocal military invasion if the energy lifelines aren't reactivated.

In a series which largely eschews violence and militarism in favour of what might be truer scenarios (a more quiet occupation by a slick ambassador, not unpleasant bureaucrats and Russian workers), Occupied sketches out how your world might end.

This remarkable series – which screens on some service like Netflix but is now available on DVD/Blu-ray for more considered viewing – has been Norway's most expensive television project ever, and by its very nature has enraged (quietly and diplomatically, of course) the Kremlin.

But has also raised a largely unspoken era of the country's past when their government under Vidkun Quisling (whose name has entered history books as synonym for traitorous collaborator) went into cahoots with the Nazis as a puppet regime between 1942 and the end of the war.

So, better than yet another series about that cliched “dystopian future”, Occupied is as much about a dystopian past – and a possible immediate present – as anything else.

Where this series succeeds convincingly is in its ordinariness: the woman whose restaurant is quietly going broke until the Russians – all courteous – start dining there; how compromise becomes unwitting collaboration; how a well-intentioned PM is forced to accommodate the clear but uncompromising bullying from the soft glove/hard fist invaders if he wants to preserve peace and steer a path between outright military invasion and declaring a war he cannot possibly win . . .

Then of course there are those emerging Free Norway forces of local militants (who are few in number but understand how to maximise media, because that's the 21st century) and . . .

Local teenagers fueled by hormones as much as patriotism, Norwegian loyalists on the razor edge of blind and mutant militarism; a journalists caught between the need for access and reporting things as they happen . . .

Occupied has its many flaws: They become increasingly obvious, not the least being the premise which begs the question, why peel away from providing an economically essential gas/oil lifeline before you've opened your new clean-green option?.

But it is an utterly compelling series which springs surprises, and sometimes reminds us of the banality of evil . . .

And best of all, this future doesn't come with that cliché “dystopian”.

Not a zombie in sight.

And this is just series one.