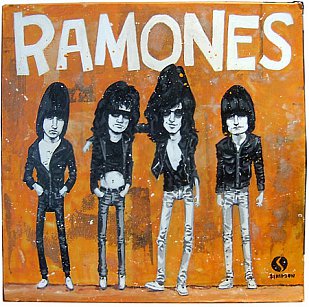 The best thing about being in a band? You get to stay up late and make a lot of noise, maybe make some money and become famous.

If you want people to notice your group it's a good tip to all dress alike so when you walk in a room you come off like a gang. Black is good.

Worst part about being in a band? Well, these two docos about noisy gang members who favoured black, the Ramones and Metallica, offer almost too many to count.

Just try making an album for a kick-off. It's hard enough at the best of times to write and record music, but if you've got members sidelined through injury (which means drugs or alcohol and sometimes both), some duelling egos (James Hetfield v Lars Ulrich in Metallica, Johnny v Joey Ramone) and distractions outside the band (Metallica's Lars Ulrich taking on Napster, Dee Dee Ramone wanting to be a rapper) then just getting out of bed in the afternoon and going to work can be a drag. So you don't.

Hetfield disappeared into rehab for almost a year after work on what became their St Anger album started. He was rarely in touch with the band. They had no idea when or if he'd return. When he came back, his treatment meant he would only work from noon to 4pm. Rock'n'roll keeps some strange hours, huh?

Ramones: End of the Century and Metallica: Some Kind of Monster lift the lid on bands whose image and reputation takes a battering in these revealing and often unsympathetic character studies of dysfunctional group dynamics.

Metallica's management started paying US$40,000 a month to a therapist just to keep them together. And that went on for almost two years. Getting rid of the therapist - who seemed to think he had become integral to the band, if not an actual member - proved as difficult as convincing the band he might be useful in the first place.

Of the two docos Metallica: Some Kind of Monster is the more courageous for the band to have released. Occasionally Ulrich and Hetfield come off as amateur humans: the former an art-collecting intellectual with an almost new-age vocabulary which disguises a ruthless determination; the latter is frequently uncommunicative with a shell around his emotions and is a passive-aggressive controller - but with a temper.

The doco, which was in danger of never appearing when Hetfield returned and questioned its purpose, picks up the band when bassist Jason Newstead quit (was bullied out, actually) after 14 years. Producer Bob Rock sits in as the band start sessions in San Francisco.

Immediately the old simmering issues of control come up, the therapist is hired, Hetfield is silently cynical about the "mission statement" he introduces, there are doors slammed and lots of bad language. Then things get really difficult.

Only guitarist Kirk Hammett (who has replaced drugs and alcohol with surfing and some cod-Buddhism) comes off as someone you'd want to share a coffee with.

The nagging question as the months turn into years between their first meeting and the album appearing is: Why do they still do this? They are barely on talking terms even when Hetfield returns, they have completely separate lives with their families, they don't need the money, their music is "stock" as Ulrich says, and lyric writing is a painful process which throws up only the most juvenile and absurd rhymes.

Why? Maybe, despite it all, they can think of no other life outside the gang they created.

The Ramones out of Queens weren't that much different: Johnny was violent, angry, a disciplinarian (he put them in the uniform) and like Hetfield keeps his emotions under wraps.

Gangly Joey, a misfit from childhood, is intelligent and creative but hampered by an obsessive-compulsive disorder. There was always tension between the two, and all of them argued on stage, which came to a head when Johnny got Joey's girlfriend.

That dumb pop of The KKK Took My Baby Away now sounds very pointed, but Joey put it all in the lyrics and sank inside himself. It is tragic.

But where Metallica maintained a lineup until Newstead's departure, Johnny Ramone thought nothing of dumping band members who no longer served the greater purpose of the gang.

The cartoon image was useful, just bring in another guy in black leather jacket and torn jeans, who cares? It was the sound that mattered. They were organised, "like the military" says Debbie Harry.

Although offering an overview of their long career, and conceding the in-fighting and frustration of never getting the great album which made them world-beaters, a cloud hangs over Ramones: End of the Century.

Joey died before they were inducted into the Rock'n'Roll Hall of Fame, crazy Dee Dee died of a drug overdose shortly after the doco was finished, and right now Johnny is battling cancer.

If both docos are unflattering they are also as fascinating as watching car crashes, and at times with a similarly violent soundtrack.

If you don't die, get to hate each other or get kicked out of the group then sometimes you do make lots of money (which you can fritter away on drugs or alcohol or both, or buy US$5 million Basquiat paintings) and you can get to be famous.

Gee, the late Joey Ramone was so famous they've named a little street in downtown New York next to CBGBs after him.

You suspect he'd rather have been around to be inducted into the Hall of Fame however.