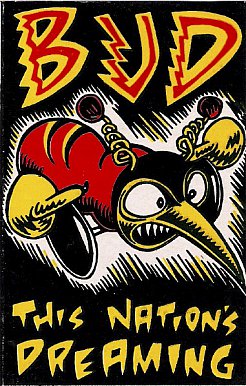 It was a good idea at the time which turned into an even better one: follow the story of band playing its first public gig from their rehearsal room to that moment under the lights . . . or in this case on the grubby "stage" at the Rising Sun Hotel in Auckland.

And by sheer chance -- and I cannot remember who suggested This Nation's Dreaming -- the people we picked were interesting of themselves: drummer Richard Barr was excellent and a librarian by day; Phil Smith on bass was a television journalist (he subsequently went on to great things) and had bought his instrument with his Visa card; singer/guitarist Peter Young worked at Rank Xerok and had the business smarts so jacked up the huge rehearsal room in downtown Auckland and the Rising Sun gig; and singer/guitarist Andy Hay, at 25 and the oldest, had coxed the New Zealand rowing eight at Edinburgh and Los Angeles, was a schoolfriend of Phil's and at the time had a lawnmowing contract.

They also wrote great punk-pop rock songs like Gasoline ("go and get the gasoline, we're gonna decorate the sky,  we're gonna give that car a real goodbye") and More Wild Stories ("You are the greatest girl, and I want to be with you . . . . some of the time").

Those songs and others turned up later on their self-produced tape Bud (cover by Anthony Ellison) along with Room Full of Clocks which had been recorded at the Rising Sun.

It was a thrilling gig (the Plague who followed them drew their own skinhead crowd along with This Nation's Dreaming's quieter and more physically slight friends) and the band played . . . well . . .

Yes, they missed a few notes and fluffed a few intros and it didn't start well -- but by the halfway point they were onto it and pulled dancers to floor. I loved it, the band had a great night, their friends were pleased, we got a good cover story, the tape turned up later and I have kept it visible from my desk ever since.

They broke up not long after.

I was introduced to this band by a friend who worked at the Gluepot, bought the cassette, and waited for them to become huge. Alas it was not to be - a fact which perplexes me to this day. I played the tape so much I ruined it. Thanks so much for posting this...it bought tears to my eyes. Happy days.

Just read your comment. I was the singer/guitarist in TND and am currently trying to get some remastering done. At the least I will have a CD available of the album if you would like a copy. Let me know.

Andy! I'm the friend Edward refers to above in his comments. Ex-Gluepot upstairs bar manager. Would happily pay for some copies of the CD. Would love to sell them in our NZ-style cafe in Brooklyn, NY: dubpies.com - Also would like permission to replicate the cassette cover as our company t-shirt - but transposing the BUD into DUB. Let me know! Cheers!

from the vaultsnew zealand music