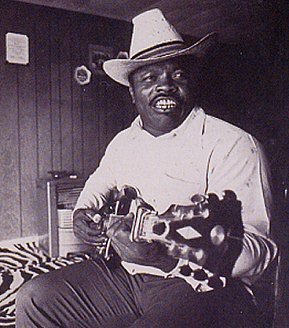 Not a lot is known about the Mississippi-based country-blues and gospel singer Boyd Rivers who died in '93, but his growling voice seems to belong to a much older time.

He was born near the town of Pickens in December '43 and after being injured at his casket-making job in '72 he lived off his music and the pay-out. He was also a Reverend.

And that's about it.

Oh, and he seems to have recorded about a third the number of songs that Robert Johnson did. Just seven or eight.

And that's about it.

But here he is.

Be prepared to be impressed.

(As with this Abner Jay song, this comes from the three-disc set Fire in My Bones: Raw and Rare and Other-Worldly African-American Gospel 1944-2007.)

The Gershwin brothers' Embraceable You, written in 1928, became a jazz standard and down the decades has been covered by an extraordinarily diverse range of artists from Nat King Cole, Doris Day... > Read more