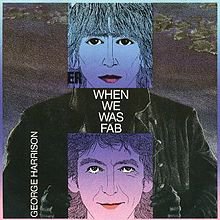 Among the many seeming ironies of George Harrison's long career was that, despite being the Beatle who most wanted out of people's expectations and what that meant, he would frequently draw on that period for inspiration or make overt references back which were unmissable.

His solo career songs This Guitar Can't Keep From Crying and Here Comes the Moon refer to While This Guitar Gently Weeps and Here Comes the Sun respectively. And while it was no surprise that in the aftermath of John Lennon's death he would - as Paul McCartney did -- pen a tribute (all Those Years Ago, see clip at bottom) what was more unexpected came in '87 on his album Cloud Nine.

In a more generous mood it seemed, he looked back on the Beatlemania period with affection and amusement to write When We Was Fab,. It was 20 years after Sgt Peppers and maybe he was ruminating over that line, "it was 20 years ago today"?. 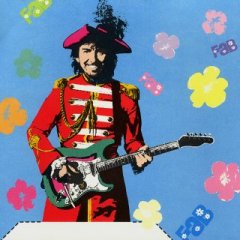 He also followed through with cover art on the 12" single which made reference to it also, the drawing nodding to his image on the Revolver album, and in a poster (taken from the tie-in video) which came with the limited edition box set.

But it was in that playful video (and many of his videos like Crackerbox Palace were often more funny than their sometimes dour surrounding album) where he pulled out all the mop-top stops.

Directly by Godley and Creme, it has Harrison in his Sgt Pepper uniform, a guest appearance by Ringo, a visual reference to "the walrus was Paul" and a passing nod to Lennon.

Quite why Harrison at this period would become so amusing about those long gone days is a bit unexpected, but Cloud Nine was a more breezy album all round. (Perhaps that's what happens when you have a second home in Hawaii?)