So who sold a lot of records then? Oh yeah Rihanna, right? And the Beatles and Elvis? And, of course, Peter Dawson.

Peter Dawson? Yep, according to the liner notes on the (possibly) mid-Seventies album this track is lifted from, Dawson -- born in Adelaide in 1882, died Sydney in 1961 -- sold at least 14,000,000 records in his long career. His career reached from cylinder discs with the Edison-Bell company (where he recorded under the name Leonard Dawson) into the vinyl album era, and he sang everything from opera to Australian folk songs.

He was hugely popular -- he appeared at the Royal Opera House and Covent Garden during his many years in Britain -- and also sang under a number of aliases: for lighter songs he was Frank Danby, for music hall material he was Will Strong and for Scottish songs he was Hector Grant. He was also JP McCall for some of his songwriting credits.

His company toured Australia and New Zealand in the years before World War I and he had been recording 78s since 1904.

He might not have seemed particular in his repertoire -- he sang Mendelssohn and German lieder but was equally at home on The Road to Mandalay and Waltzing Matilda -- but the clarity and power of his delivery is what endeared him to millions.

He also served in World War I and during the next big one -- for which he was too old -- he worked in his brother's metal factory.

Quite a life, and quite some sales figures too.

So here then is 1.30 seconds of a man the Guinness Book of Records places alongside Caruso and Presley as one of the top 10 record sellers of all time. Irish singer-songwriter Damien Rice is perhaps the one we should thank – or blame – for Ed Sheeran, as this song was the young Sheeran's epiphany. Sheeran was 11 when, by his own... > Read more 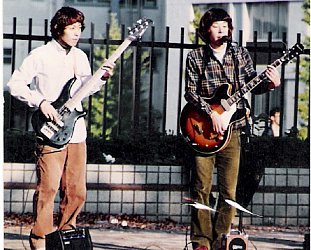 At some time in the mid Nineties while in Tokyo I ambled through Yoyogi Park where the Fifites rock'n'roll stylists slick back their hair and dance to old Elvis, and girls and boys alike dress like... > Read more