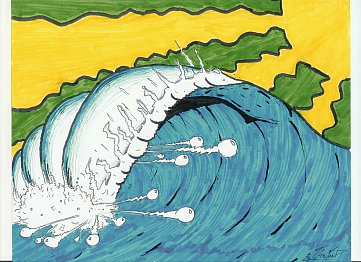 Some years ago while researching and writing the liner notes to a series of New Zealand psychedelic collections put together by Grant Gillanders, I came upon this track . . . and just kept playing it.

In '68, the Music Convention seemed trapped between two eras, the surf-rock guitar of the early Sixties and the psychedelic movement with its sitars and mind-bending possibilities.

Rather than chose between the two they simply slammed them both together and then turned it up to 11.

Their career -- such as it was -- appears to have enjoyed/suffered a similar split personality.

Aside from this thunderous piece of surfadelic mayhem they also sprung odd pop singles (Has Anyone Seen My Limousine b/w Good Clean Fun which appeared simply credited to the band members Bob, Graeme, Sean and Greg).

But when they were asked to contribute songs for the surf movie Children of the Sun in '68 (the DVD finally appeared in 2008) they stepped up with great tracks lik Green . . . and this rare beast.

As far as I can tell, this was the final hurrah from Music Convention although in an odd twist in the late Eighties when I travelled to hina with Gray Bartlett and his band -- who were playing MOR pop and instrumentals to the delight of the Chinese audiences -- the guitarist in the band was Greg O'Donnell.

I didn't know it at the time, but that guy who stepped into the spotlight and sang a moving ballad was the same one who had unleashed the Bellyboard Beat 20 years previous.

Bellyboard Beat and other Music Convention tracks -- along with dozens of other Kiwi psychedelic rock appeard on the three volumes A Day in My Mind's Mind.