Does anyone release albums like Invite the Spirit, from which this extract is lifted, anymore?

This expansive double album came through Celluloid out of New York and was a live recording of improvisations by Korean gayageum player (and vocalist)  Sang-Won Park, avant-guitarist Henry Kaiser and percussion player Charles K. Noyes (who also plays saw).

That's not the kind of line-up you see often, and this isn't music which tends to get much turntable time either.

The gayageum is an interesting instrument (see here for an interview with the Korean master of it) because it has a loose twangy sound when the strings are plucked. As with the sitar it has moveable frets/bridges.

Park was a young pracitioner (only early 30s at the time of this recording) but had been a member of the Traditional Music Orchestra of Seoul.

Noyes and Kaiser -- fans of traditional Korean music -- had both played with Material, and this trio came together in '83. As far as I know this was their sole album.

I leave it over to you to decide for yourself, but I rather like it. Hence it appearing here and pulled From the Vaults. 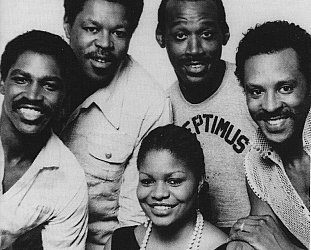 Sounding a decade too late for the disco era, Septimus were a black outfit from Seattle built around singer/guitarist and producer Herman Brown who originally recorded a version of this song in '83... > Read more

This hot young trombonist, trumpeter and singer from New Orleans -- who plays the National Jazz Festival in Tauranga at Easter, and is interviewed here -- brings more than just the local funk and... > Read more