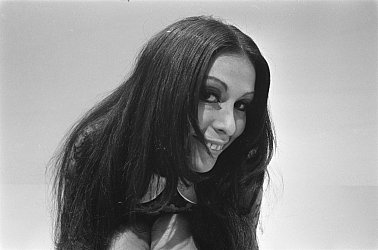 In 1968 middle-class, middle-aged (and some kids) Britain held a collective breath. That year the Eurovision Song Contest was being hosted at the Royal Albert Hall, after a bare-footed Sandie Shaw had won it the previous year with Puppet on a String.

This time success was assured because the committee had put up Britain's favourite pop star Cliff Richard . . . and the song chosen was Congratulations by the same team that had penned Puppet on a String, Phil Coulter and Bill Martin.

For the first time the ESC was being broadcast in colour so home viewers could get the full impact of the garishness that sparkle, twinkle, velour and satin can bring.

Cliff dressed for the ocassion too . . . although as you may see from the clip below, we now know where Austin Powers got his Swinging Sixties dress sense from.

So all the elements were in place . . . but Cliff came in second!

Oddly enough Massiel was not Spain's original choice, that honour was to go to Juan Manuel Serrat but he would only sing in Catalan and Franco's regime would have none of that nonsense.

So Massiel it was.

But really, if Serrat had sung this in Catalan who would have known? La La La still holds the ESC record -- possibly a world record -- for having the most number of "la-la's ".

A whopping 138, and doubtless they sound the same in Catalan.

Did I count them?

Of course not, that honour went to Des Mangan who wrote the wonderfully silly 2004 paperback This is Sweden Calling: Everything You've Ever Wanted to Know About the European Song Contest But Were Laughing To Hard To Ask!

I recommend the book, but neither of these songs.

With his sullen and sneering good looks -- he might have been a truck driver in Memphis like the pre-fame Elvis or a member of the Clash -- Jack Scott was briefly a big star, and at the time in the... > Read more