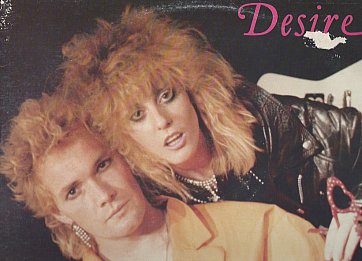 You probably didn't need me to add the date for this one pulled From the Vaults. The hair says it all. Hers too.

Desire were singer/keyboard player Suzie Divine and guitarist/keyboard player Gary Havoc, the latter being somewhat of a fixture on the New Zealand music scene at the time.

He'd been in a few bands if I recall, certainly Gary Havoc and the Hurricanes during the late Seventies who were more rhythm and blues, and played places like Mainstreet and Island of Real. They had an EP out on the RTC label also.

By the mid Eighties though he was firmly entrenched in the big hair/New Wave/hard rock thing.

Of Suzie I know nothing, except she seems to have gone to the same hairdresser as Kim Willoughby at the time.

This song -- lifted from vinyl -- comes from their EP (which included a song called So Divine which was smart self-referencing) and also playing on the four songs are bassists Mark Huckstep and Robbie Robertson, and drummers Simon Hannah and Mark Hansen, a variable line-up which suggest Desire were a studio confection rather than a touring band.

I could be wrong.

Of interest too is the name Gary Harvey as one of the backing singers (billed as The Yobs).

Recorded at Mandrill and released on WEA -- which was a Big Deal -- it is also identified as Havoc 1.

I wonder of there was a Havoc 2 release?

Anyone enlighten us on Desire?