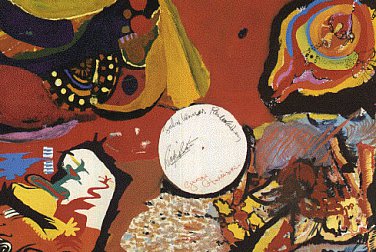 Even more than the 10 minute version of Revolution (below), the most sought-after and obscure Beatles track is the so-far unreleased Carnival of Light, a free-form instrumental which was recorded for a psychedelic event at London's Roundhouse to take place in late January '67.

McCartney said he'd give the organisers a sound effects tape to play and on January 5 the Beatles hunkered down -- perhaps after a smoke -- to create an electronic collage.

When the Anthology rolled around there was some brief consideration given to including it, but the word was that Yoko Ono nixed it, and subsequently Harrison's widow Olivia has apparently insisted George had no interest in it ever being released.

That hasn't stopped McCartney mentioned the possibility of a release whenever he has some new album to flog or there is another Beatles reissue.

The track apparently lasted 13 minutes and 48 seconds and according to Mark Lewisohn in The Complete Recording Sessions (he'd be one of the few who has heard it) the overdubbed four-track tape consists of distorted drum and organ sounds; distorted lead guitar; church organ, various effects (gargling) and screaming, demented voices; and sound effects heavily echoed.

It was at that time the longest thing they had ever recorded, it was labelled Untitled and was very avant-garde (which supports McCartney's long-held contention that he was into avant-garde music before Lennon who presented Revolution 9 for the White Album over a year later).

This track here -- which kicks in after about 10 seconds -- has popped up under the name Carnival of Light and may or may not be very track. It sounds perhaps more like just one or two of the four-track tapes, but interestingly enough in the final minutes it bears considerable resemblance to a section in the McCartney-curated Liverpool Sound Collage, which perhaps adds weight to it being -- if not the actual Carnival of Light -- then at least of the same provenance.

The Beatles, as you've never heard them before?