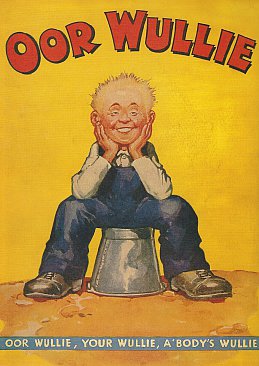 When I was a little boy growing up in Edinburgh I was doubtless surrounded by Scottish songs (I certainly heard the pipes) but it wasn't until I came to New Zealand that I can clearly remember particular songs (like The Cherry Rhyme which was played on the childrens' session on 1ZB on Sunday mornings).

They were beautifully drawn (for 40 years by Manchester-born Dudley D Watkins) if all rather unsophisticated humour.

The Boons and Oor Wullie (pictured) for those who don't know were a family and Wullie a Dennis The Menace-like prankster who was always getting in to mischief.

The dialogue was all in braw Scottish: eg "Now you yins get tae yed bed, else ye'll mak yer gran'paw worse wi' yer noise" says Maw Broon to the kids when Grandpa is poorly.

I've read and re-read many of these full page cartoons and so on (and spotted an anti-Semitic joke on the humour page from the late Thirties) but only recently discovered there was a CD attached to the inside front cover.

It contans such classics as Gay Gordons, Amazing Grace (a song my father hated, thought it a real religious dirge), Loch Lomond, Scots Wha-Hae and so on.

And this one which I seemed to have somewhere lodged in a long forgotten memory bank because I recognised it immediately.

I post it here for absolutely no reason other than it appeals to me.