Someone very astute once observed that every musical style that ever existed is being played somewhere, even now.

Certainly the most arcane folk music from the backroads of Mississippi and Obscuristan seems to be out there in reissues. Okay, maybe ancient Egyptian music might be underrepresented out there . . . but you get the drift.

The remarkable things also is that when a new genre seems to race through Western music – like British Beat Pop of the early Sixties and prog or punk – it doesn't replace its predecessors. That music still survives in pockets.

By 1968 psychedelic pop and increasingly harder rock had washed over Beat Pop of the Beatles' kind, which in turn had rolled over all that rockabilly and rock'n'roll of the Fifties.

But even at that late date – and before the rockabilly revival in the early Eighties -- rockabilly and Southern rock'n'roll and rocked up country was still being made and recorded, notably appearing on the Big Howdy label out of Louisiana (initially in Bogalusa then Angie).

Music on the Big Howdy label was recorded all over the South (New Orleans, Memphis, Nashville, Biloxi) as well as their own studio. And although only a few of the artists broke into the charts their enthusiasm tapped into a musical style which had emerged from the dirt beneath their feet and they kept it alive in the decades after rockabilly and rock'n'roll had first emerged.

Dayward Penny was born in Franklinton, Louisiana in '28, heard local music from his fiddle-playing father, picked up guitar and during service in the army he formed a band in '57 . . . and thereafter he worked day jobs and played in bands.

He met Big Howdy founder Hack Kennedy and then began recording for him, knocking off at least 20 songs, among them Come Back Baby which is a kind of laid back rock'n'roll song . . . the same year as the Stones' Street Fighting Man and the Beatles Yellow Submarine.

Apparently Penny was offered a contract by Warners but he didn't want to move to Nashville. He died in 2012. This song and 32 others from the Big Howdy label which covers Southern country, rock'n'roll and rockabilly – mostly from the Sixties – are collected on the excellent The Big Howdy Recording Company Story: Rockabillies, Hillbillies and Honky Tonkers from Mississippi and Louisiana on Stomper Time Records (through Border in New Zealand).

It is shameless fun, almost instantly familiar: Bad Luck by Danny in '61 anticipated Dylan between Bringing It All Back Home and Blonde on Blonde, and damn if BJ Johnson doesn't sound like Mike Nesmith on Shackles and Chains from '69.

And when you look at the dates of the recordings you are reminded that a whole other musical culture continued to exist at the time the rest of the world was screaming at pop stars from Britain then tuning in, turning on and dropping out.

We'll revisit this collection some time soon because is is a treasure chest of non-hits, retro sounds and is sometimes as revelatory as the first time you heard Hound Dog or Positively Fourth Street. 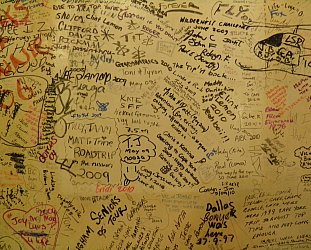