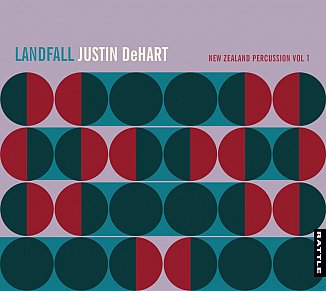 Many decades ago when this writer had a free-format radio show playing whatever music took his fancy, for perverse pleasure and to elicit a response, he would play tracks by the percussion ensemble From Scratch.

Within a couple of minutes the calls would come in requesting – demanding actually – that they be taken off.

From Scratch were a group which worked best when seen rather than just heard. It's a problem for most listeners when drumming/percussion is uncoupled from the visual experience of seeing it created.

Only hardcore Led Zeppists could listen to John Bonham's solos, same for Cream fans with Ginger Baker, although to be fair the latter did translate pretty well to record for the Wheels of Fire album.

So here, on this album subtitled New Zealand Percussion Volume 1, the internationally acclaimed American percussion player and lecturer/academic Justin DeHart – now a resident teacher at the University of Canterbury – presents 11 pieces from a variety of local composers including Glenda Keam, David Downes, Simon Eastwood and Chris Gendall. Some of these names will be familiar to Elsewhere readers.

It is the diversity of the writers and their distinctive approaches which gets this collection well past the preconceptions of “drum solo” or “percussion ensemble”.

Here DeHart is offered compositions which explore sounds from the expected (skins'n'cymbals) through melodic marimba, chimes, gamelan-influenced art music and stones slapped together to objects made from wood and ceramics.

Objects are scraped and caressed (Plateaux) as much as hit, and DeHart coaxes real tension/release in many of these pieces.

The background to each of these different pieces is helpfully explored at the Rattle website here which we recommend.

Special interest listening for sure, and doubtless better witnessed than simply heard.

But because of their melodic and sonic qualities, this writer would readily play many of these pieces on radio

Not just to elicit a reaction (the switchboard would light up) but to introduce music by New Zealand composers performed by an internationally respected artist which rewards close attention.