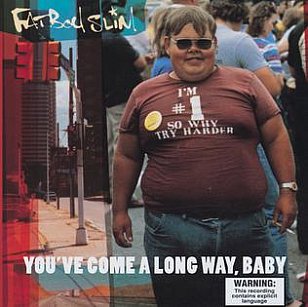 Slightly funny and true story: Back in the distant past Fatboy Slim -- aka famous DJ Norman Cook -- was coming to New Zealand and at the Herald we arranged for one our feature writers -- who'd expressed interest in doing something rock'n'roll rather than another worthy health story about children -- to interview him.

The time was arranged (about 9am as I recall) and right on the dot he called her . . . and she wasn't there.

Now at that moment I knew two things about Norman Cook: that he lived in Brighton and that he was married to Zoe Ball who was apparently someone famous on British TV that I didn't care about.

Oh, and that he had that terrific song Fatboy Slim is Fucking In Heaven which the teenager in the house I was in used to play all the time in the hope it might irritate me.

So the next time the phone rang I realised we needed to answer it. And I did and started with, "Hi Norman, thanks for calling. Eleanor isn't here right now but I'm delighted to speak with you. How's it going . . ."

And away we went.

It was a terrific interview for a few reasons: An artist always presumes the interviewer knows about them so is happy to blather on, and because I knew very little I could ask the dumb questions which he hadn't had to answer for a while. (The same thing worked when I -- who hadn't been in yacht in maybe four decades and couldn't care less about the America's Cup --  interviewed Sir Peter Blake and Brad Butterworth). And at least with Norman I'd recently been in Brighton so . . .

When I got home that night I hooked his You've Come a Long Way Baby album away from the teenager -- the album which features that notorious track mentioned above, now bowdlerised on Spotify to be utterly humourless, and they feature the dull North American cover -- and banged it on loud.

Loved it. Played it LOUD.

Did my homework on Norman: Oh, he was a Housemartin! And in Beats International!! Of course, that terrific Better Living Through Chemistry album, jeez was that by Fatboy . . . !!!

If only I'd remembered then what I knew now. But actually no, because that would have been a different and much more boring interview for both of us.

Anyway, all this is to say that among the many excelent budget priced vinyl reissues at JB Hi-Fi stores here right now is this one. It comes in the proper UK cover and the rude word is there for all to hear.

Just the way it should be.

Buy it direct on-line from here.

Oh, and Eleanor had been held up in traffic. Even then Auckland had traffic problems. And child health to be written about . . .