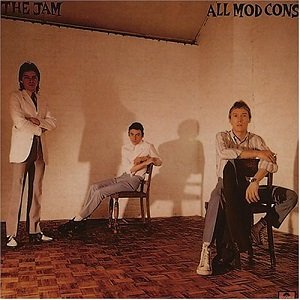 If Liam Gallagher yearns for Oasis again and brother Noel still wants Paul Weller's career, then we need only go back to this '78 album by the Jam to hear Weller aspiring to be the post-punk Ray Davies.

“To be someone must be a wonderful thing”, as the second track says.

This third album by the Jam steered by singer-songwriter Weller even included a cover of the Kinks' David Watts . . . and To Be Someone, the bitter Mr Clean and the bruising Billy Hunt were within Davies' social comment about Britain's class divisions.

What further elevated these tight 12 songs were the more contemporary street-level observations on 'A' Bomb in Wardour Street (the single had their non-album cover of the Who's So Sad About Us on the b-side) and Down in the Tube Station at Midnight.

As George Kay observed in Rip It Up at the time, Weller was “brilliantly moving from specific close-ups of society's stereotypes . . ,. then turns in his most moving, provocative songs as scalpel jobs of the modern world”.

The Listener reviewer said of this NME album of the year, “the first two albums merely circled the honeypot, but this one strikes home”.

If Dave Marsh in Rolling Stone was unimpressed (“a record that's nearly catastrophic, weak at the surface and almost rotten underneath”) his was a lone voice.

All Mod Cons – with the often ignored if slightly awkward acoustic ballad ballad English Rose showing Weller's love for his country amidst the chaos of the times – is worthy of a place in any collection.

It is on Spotify here (with the longer version of In the Crowd with cool backward guitar pyrotechnics at the end).

But we mention this album because it is out on vinyl and is another to add to your expanding and diverse record collection.

Check out this too.