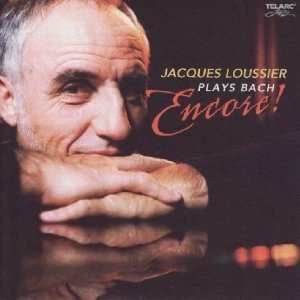 Those of us with long memories and greying temples will remember a time when New Zealand television had cultural programmes in prime time, albeit in black'n'white.

One of the mainstays of those days was pianist Jacques Loussier whose trio jazzed up Bach, and looked very cool doing it. Loussier made a bit of a career out of jazzing the classics, but unlike some he seemed to have an intuitive sense of swing as well as poise -- so while serving both masters he managed to create something his own.

This double disc (two for the price of one) comes from recordings in the early 90s and has something else: the second disc are his own compositions, the first being an expansive and quite dramatic Concerto for Violin and Percussion played by the Prague Kammer Orchestra. It moves through very different sequences and styles (pieces are entitled Prague, L'Homme nu, Buenos Aires Tango, and Tokyo), and it is quite engrossing.

But the first disc of Bach is the one that will probably get repeat plays.

Loussier may not be a familiar name to many these days -- but Eminem knows him all too well. Loussier sued the rapper for ripping off his tune Pulsion for the beat of Kill You on the Marshall Mathers LP.