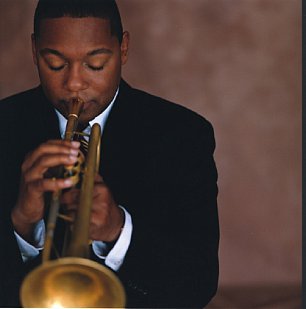 To refer to Wynton Marsalis as a jazz musician is to unintentionally diminish him. Certainly he plays jazz trumpet, has released a couple of dozen albums in the idiom, was the catalyst for and focal point of a renaissance of jazz in the 80s and is musical director for the prestigious Lincoln Center Jazz Orchestra in New York.

Yes, Marsalis is a jazz man and proud of it.

But that hardly accounts for a parallel classical career (in 1983 and 1984 he won Grammys in both jazz and classical categories), a high-profile role as an educator and spokesman for music education, the Pulitzer Prize for music in 1997 for his oratorio Blood on the Fields, or his recent scores for dance companies such as Twyla Tharp and Alvin Ailey.

Add that he is intellectual and charismatic, good-looking and of sly, understated wit, and you can see why he was named one of America‘s 25 Most Influential People by Time and one of “the 50 Most Influential Boomers“ by Life.

Like Duke Ellington, Marsalas - not yet 40 - is bigger than the music he commands.

Best of all for jazz’s public profile has been that Marsalis is controversial and opinionated. His conception of jazz is grounded in the tradition of the art‘s greatest practitioners: Thelonious Monk, Charlie Parker, Miles Davis (“when he was playing jazz“ he says) and Duke Ellington.

With his debut album in 1982 at age 19, this son of noted New Orleans pianist and teacher Ellis Marsalis announced unequivocally that the true path was back to the future. He also arrived with an in-house cheerleader in black intellectual Stanley Crouch, whose liner notes on Marsalis albums to this day only just fall short of hailing him as the new-born king.

After classical training at Tanglewood and Juilliard, Marsalis had an apprenticeship in jazz with Art Blakey’s band and arrived at his debut fully formed. He was a Davis doppelganger, stylistically and sartorially, but quickly found his own voice.

But he has remained consistent in his beliefs. In 1988, in Wellington for the arts festival, he spoke of studying Ellington and next month he comes to New Zealand helming the Lincoln Center Jazz Orchestra in a programme celebrating last year‘s centenary of Ellington‘s birth.

The tour will have them present this alluring music in China, Australia, Taiwan, Japan and Hawaii.

As a jazz ambassador, Marsalis has grown into the role and his 90s albums are more interesting than his early ones. His ballet works are studied, sometimes deliberately amusing conflations of jazz and classical, and his jazz albums have little of the smugness previously prevalent. Ironically, given his profile, there seem fewer listening to his solo work today. For many, he remains more interesting for what he says.

Suggest, for example, that it is because of his outward-looking attitude that jazz - which often appears to talk only to itself - once again has a concert-hall audience and his reply has a typical barb in the tail.

“Jazz has always had different types of performers. There were the introspective types like [John] Coltrane or Miles or Monk, but they were brought to a mass of people by someone like [promoter] George Wein through big festivals.

“Then there were always the real extroverted performers like Errol Garner and Cannonball Adderley ... [but] sometimes there‘s a feeling among jazz criticism that if someone is extroverted and their music is joyous then in some way it is less profound than somebody who is introspective or who has this rebel-without-a-cause attitude.”

Marsalis has never been without a cause. At the height of gangsta rap he quietly noted many found it easier to deal with a black artist who was broken down and a drug dealer than with a well-presented, intelligent and articulate black person.

He doesn‘t see such statements as provocative, just clear. These are his observations and things he believes true, and things he has thought about or educated himself in.

Education has been paramount in his mission and through it he encouraged numerous young musicians, some of whom have played in his bands.

While great strides are being made in music education, he says, the intellectual community is far behind “because there are so many left-over conceptions from the critiquing of classical music and also in painting and literature, like the whole belief in abstraction”.

“That‘s really an old thought, an early-20th-century thought that‘s been tested. Abstraction is just another way of expression and not the way. The whole belief in abstraction presided over the decline of orchestral music. It ran the audience out of the concert hall as if it was some great achievement. And jazz musicians in the 60s fell victim to the same thing, the belief that to be abstract is to be innovative. That’s a total misconception on every conceivable level.

“To be abstract means to be abstract, that‘s all. Abstraction became an issue in the 1900s and for some reason it could take place all through the 20th century as if it were still some new idea.”

If his argument is that an idea explored doesn’t necessarily benefit from re-examination and that people - critics in his world - mistake style for substance, many would agree.

But Marsalis himself arrived restating some well-tried genres, and many critics, while conceding his technical gifts, found him stylish but unimaginative. The unofficial Marsalis Movement - during which, Ellington-like, he gathered similarly elegant, like-minded, educated and talented young players - was labelled “neo-conservative“ and propounded its new orthodoxy in an art form which places pre-eminence on individuality.

During the 80s and early 90s while the neo-cons ruled, jazz got headlines and cover stories, and people went out to see it again.

Again as with Ellington, Marsalis is a populariser without being a populist who sacrifices or demeans his music, or panders to taste. His music is complex, intelligent, Pulitzer and Grammy-gathering - and there's a lot of it.

In 1991 he released a three-CD series, Soul Gestures in Southern Blue, and his strike rate between then and the last half of last year, when he delivered a series of eight albums entitled Swinging into the 21st Century, was at least one a year, some of them double discs.

Marsalis has always been possessed by a sense of urgency because his generation is the first, he says, when the great artists like Ellington aren't around. The responsibility for this music now falls on us, he says.

His own body of work is problematic: it is difficult for even long-time champions to name "classic" Marsalis compositions and there appears no pool of musicians, beyond his own, performing his often stiffly referential material the way they do Davis, Ellington and others. That said, you could note Ellington didn't hit his peak until 40.

And so Marsalis comes to town with an Ellington package. What would he like people to take from the experience?

"That 'we had a good time.' That's all. Then maybe they'll check him out, that's the most you can ask for. If you see something you like, one day maybe five years later you'll be in a record store or see a book and think, 'Yeah, I remember that, that was good.'

From Wynton Marsalis it sounds a remarkably modest ambition.

This article appeared in the New Zealand Herald in 2000 in advance of a Marsalis concert. www.nzherald.co.nz 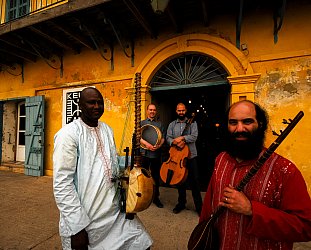 For nearly twenty years the ensemble Constantinople -- with memebers from Canada and Senegal -- have explored musical diversity through the lens of ‘East meets West’,an ever changing... > Read more