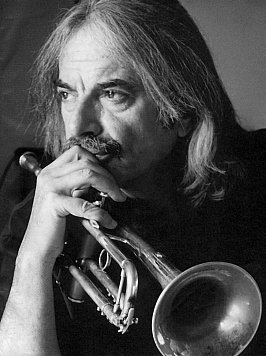 It’s disappointing and embarrassing that one encounter may put you off a musician for such a long time. Then, shame-faced, you crawl your way back later and have to concede everybody else was right.

When I first heard The Band I was into loud rock’n’roll and these country music guys just seemed exceptionally dull and -- the worst crime in rock -- worthy.

Well, everybody else was right . . . and I came late to that particular party.

I can’t remember the album that put me off trumpeter Enrico Rava -- but it would have been 20 years ago and was probably among the albums I bought at some fire-sale. I played all the others and loved them, then Rava came through.

Can’t remember what made me reject him: the attenuated tone, the overtly romantic playing, too much like Miles Davis, lack of a hit single? Who knows?

What I do know is that in subsequent years I would hear Rava albums and think “Hmm, that ain’t bad” but never pursue the thought.

More fool me, because since the release of his The Third Man two years ago, a superb duet album with pianist Stefano Bollani, I’ve listened back to this Italian-born player (who has worked with Steve Lacy, Carla Bley, Roswell Rudd, Cecil Taylor and other heavy-hitters in jazz) and realised the awful: I was wrong.

That duet release was such an ethereal, austere, deep and dark paring that Rava’s latest album New York Days -- with a group which includes Bollani -- commanded immediate attention. And it rewards from the first few bars. 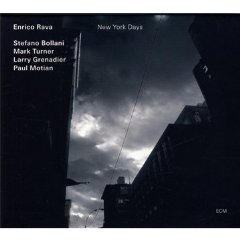 The line-up here is impressive: in addition to Bollani, Rava calls on the great drummer Paul Motian (a man renown for his angular approach to rhythmic sub-structure), bassist Larry Grenadier who has played on saxophonist Charles Lloyd’s recent albums, and tenor player Mark Turner who knows his jazz history but also has an incisive and analytical side which acts as an excellent counterpoint to Rava’s more lyrical personality.

I guess it’s the difference between the Italian and American temperament, and it’s heard at its most obvious in the bouncy Outside here: while pianist Bollani skitters across the keys setting up a swirling and unsettling undercurrent, Rava peels off fluttering ripples of notes which threaten to get lost in themselves, then Turner enters with a staccato, Morse Code run of notes which segue into some weaving melodic lines. He pulls the tune back to its centre before allowing himself space to fly free in the manner of Coltrane. Rava obligingly follows and a piece which had the potential to fall apart becomes whole again.

Bollani picks up the echoes of Rava in his brisk solo, then sax and trumpet come together for a final rapid flourish with all the geometric melodicism of Ornette Coleman. It’s quite some six minutes.

Elsewhere there are introspective moods: Certi Angoli Segreti is like a bent and melancholy Broadway ballad from the Fifties; the wonderful Interiors is the soundtrack to an imaginary film-noir set in the same period and suggest emotional places as much as lonely rooms in downtown.

The overall impression is that New York Days -- presumably named for where the sessions took place last year -- is an evocation of the city itself: Thank You Come Again could have spiralled up the stairs of the Village Vanguard in 1959; and Count Dracula conjures up taxis at night on the dark streets (and perhaps Tom Scott’s eerie alto in Bernard Herrmann’s music for the Scorsese’s Taxi Driver ).

This may be reading too much into it, but New York Days is an album of mature depth and complexity, while also offering some of the finest contemporary jazz around right now.

And would anyone who admits to preferring Steppenwolf to The Band lie to you?