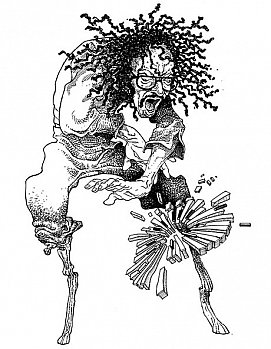 Genius is the word a lot of people use about Cecil Taylor – but words get pretty debased these days. (“Genius, that‘s like brilliant - but better, yeah?” ) So let’s just say Cecil Taylor is different and interesting.

Way back in the Fifties they used to debate whether his abstract speedthrash piano playing was actually music at all and as recently as 1983 some jerk in a supposedly serious music magazine likened Taylor’s playing to “a monkey doodling on a keyboard.” (Racists are so unimaginative).

Poor Cecil, those years at the New York College of Music and the New England Conservatory can't have taught him anything.

During the Fifties Taylor sometimes wasn’t even allowed on to a bandstand to play - so much so he apparently used to play at home to an imaginary audience.

Of course, it wasn’t all bad. He recorded regularly, was on the bill at jazz festivals and by the Seventies this man who can literally play a piano to pieces was a visiting professor at the University of Madison in Wisconsin.

But one year he failed nearly all the students in his class because they didn’t try hard enough. Good old Cecil.

The college however upgraded the students so everyone went home happy - and glad to see the last of the man who once said “I try to imitate on the piano the leaps in space a dancer makes”.

So who is this funky-weird 57-year-old who seems to irritate a lot of decent folk?

Recent photos show a guy who looks like Quincy Jones with shoulder-length dreadlocks and wearing one of those multi-coloured Bill Cosby sweaters. Oh - and sitting on a leopard-skin chair.

You wanna talk style? Cecil's got it in spades.

He’s also as likely to engage someone in conversation about Japanese architeclure, religion or the Black Mountain poets like Charles Olson. He’s no slouch.

And he makes great music too. Indefinable, visceral, powerful music.

For 30 years he's gone his own way and most recently only been recorded by small European jazz labels - until now. For the first time in 15 years Taylor is back on an American label (A&M) and the album, In Florescence, is the perfect place to start listening.

Many of Taylor’s albums (either solo or with his Unit band) are marathon efforts. A recent stunner for the small Leo label was a single piece spread over a double album. Typical.

But ln Florescence – produced by the maverick John Snyder -- is Taylor in bite-size chunks. Nobody will have told Taylor to make short “commercial” pieces (the idea is laughable once you hear him) out this one is certainly accessible. 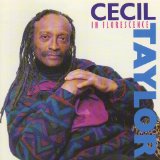 The album opens with a short roar and poem: generous and warm words about the late Jimmy Lyons, Taylor‘s friend and saxophonist for 26 years.

Poetry is well within Taylor’s orbit. He’s recorded a couple of spoken word albums, and includes a few poems on many albums.

Then there‘s the music.

His academic grounding has seen him pegged an avant-classical (“post-serialist”, that type of thing) but he vehemently denies that influence on him and insists he is part of the lineage from Ellington.

And despite the free jazz idiom in which he plays there is an undeniable sophistication about his piano playing which scoop-shovels ideas from everywhere and refilters them in the company of intelligent like-minded musicians (John Coltrane among them in the past).

Like rap however, free jazz is the kind of music which everybody seems to think is easy - until they try.

The communication between Taylor’s cascading piano, William Parker's bass and the percussion of Greg Bendian on In Florescence is almost scary. Try the massive oceanic surges of Pethro Visiting The Abyss for its sheer elemental power.

Or the dialogue Bendian and Taylor get going over the eight minutes of Charles and Thee.

And not an instrument plugged in either. Just raw, wrist-grabbing rhythms of acoustic energy.

The album also breathes easily for newcomers to Taylor. It isn‘t all intense (Leaf Taken Horn is quite reflective) and is broken up by short solo textural pieces from Bendian and Parker. Morning of Departure is a poem.

The conceptual Chai Chuiatlichue Goddess of Green Flowing Waters is a glorious 11 minute epic which starts with primal vocalisations from Taylor and Parker over assorted percussion. Taylor doesn’t even touch the piano keys until well in. And, curious though this may sound, it is the most conservative piece on In Florescence.

Even so, it's still the sound of a Jackson Pollock painting flying around your ears.

In Florescence isn’t the very best Taylor, but it's a great primer and never less than engrossing.

Cecil Taylor, along with Ornette Coleman, is perhaps the most consistently Elsewhere musician there is.

He is ferociously uncompromising, absolutely demanding of attention, tortuously unpredictable, very funny and completely absorbing once you let go of certain preconceptions.

For some, freedom is frightening so Taylor may always just be some “monkey doodling on a keyboard."

So be it. But like him or not. Cecil Taylor is a unique figure in our time.

Genius is the word a lot of people use.

The illustration accompanying this article comes from the pen of Alistair Graham (see here). Remarkable drawings of jazz musicians.