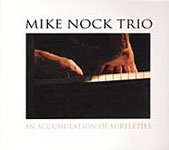 This quite exceptional double disc by New Zealand-born pianist/composer Nock arrives with the advantage of great timing: Norman Meehan's fine biography of Nock, Serious Fun, has just been published (see Elsewhere review here) on the occasion of Nock's 70th birthday.

Well, age shall not weary him as the first, exquisite and commanding disc illustrates.

With the sibling rhythm section of Ben (bass) and James Waples (drums) -- both about a third his age -- Nock offers some free improvisations recorded in the Sydney Opera House Studio in 2008 which were done after an intense session. That might explain the slow and considered title track which opens the session in which the players gently explore a theme Nock lays out.

But gradually the energy levels rise, the experimentation accordingly (Nock tickling inside the piano in a number of place or hitting deadened notes) and this intuitive drum'n'bass team (who fairly get co-writing credits on all but the opener) are with him all the way.

Joyous Awakening is romantic, slow ballad of light and space, but Rite of Passage is where the ideas flow: pointillistic plucking of the bass echoed by Nock and the angular drumming, a melody and rhythm gradually taking form through some chord crashes and vibrant runs, the drums provoking . . .

The standout however is the final 12-minute improvisation Apotheosis which moves from the leanest of bass work through explorations within and on the piano, and steadily, with increasing energy and shape, heads for a thrilling climax before pulling right back. The understanding between the musicians is like psychic magic.

The second disc was recorded live at Sydney's Sound Lounge two months later and while not exactly a more traditonal trio recording, it works around some Nock originals -- notably the seductively melodic Elsewhen, the vaguely Latin-framed Beautiful Stranger and A Tree Has It's Heart In Its Roots -- and a swinging, muscular but light on its feet, treatment of Billy Reid's The Gypsy among the other three pieces.

The centrepiece is The Wind where at times Nock coaxes out a sound as gentle as tinkling glockenspiel, while allowing space for Ben's elegant and refined bass.

Nock has delivered some quite exceptional albums down the decades in many styles (his Solo of the late Seventies remains an undiscovered gem) but here he re-invigorates the trio format, especially on that first disc where the canvas is blank just waiting for the artist to go to work.