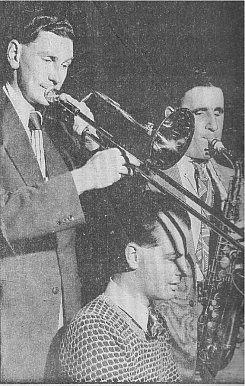 The words have written themselves into the history of great New Zealand phrases in the same way as Peter Jones' comment after the 1956 Springbok test, or prime minister Jim Bolger's dismissive words about pollsters after the general election in 1993.

For those those who were there on the night though, Peter Young's first words through the microphone in the Auckland Town Hall Concert Chamber rang with the off-the-cuff resonance.

Young, as compere of what is regarded as Auckland’s first jazz concert (as opposed to dancehall music), stepped on to the small stage on the night of August 7, 1950 and immediately observed: “Those bloody lights are on.”

And then in 1994, 44 years after that historic event, Young's words rang out again on then recently discovered tapes of this ambitious programme which introduced jazz as a serious music to an enthusiastic audience.

Newspaper reports of the day noted the youthfulness of the audience and the air heavy with concentration. Jazz, a music much derided for its freedom from constraint and slightly seedy image, had come to uptown and among its practitioners on this night were saxophonist Julian Lee, pianist Crombie Murdoch, trumpeter Murray Tanner and others who would become mainstays of the music in this country and overseas.

It takes a long memory or diligent research to get a complete picture or what it must have been like that August night, but with the rediscovery of the original tapes -- recorded by running a landline down Queen St to studios in Shortland St – the music of that period came back fresh and clear.

And of a remarkably high standard, as Errol Baker, jazz researcher and radio presenter who assisted lZB’s Jim Sutton in the research and re-presentation of these recordings notes: “New Zealand jazz musicians were amazingly inventive in this period because there had been a lot of American jazz heard here during the war through Voice of America or Armed Forces Radio.

“Sheet music took ages to get here and, of course, this was just after the war so there were not that many recordings around. Shellac used to make records had been put into the war effort.

“New Zealand musicians were dependent on listening and then using their own skills, so we shouldn’t be surprised at the standard of musicianship.” 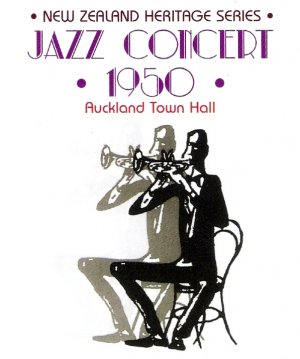 The trail of recovery of this music – now reissued on CD through Ode, but disappointingly with Young's initial comment edited out – began in 1990 when Sutton discovered two old boxes of tapes in a garage, one of which had “jazz concert” written on it.

Inside were brittle tapes with little attendant information other than some song titles and the names of musicians such as Lee, Murdoch and Mavis Rivers.

In '93 Sutton, Baker and others by the process of recovering the music. Information was gathered from the United States on how to dehumidify the tapes to prevent them from falling apart and on the transfer on to DAT (digital audio tape) and then looking to put names to the players.

Baker says it was a jigsaw puzzle of leads that initially went nowhere. Artists who were there were unable to recall who else had played, but then there was the chance discovery of a programme from the night, and the putting of names to faces from a Weekly News photospread of the concert.

Reviews of the period were only helpful in small ways: the New Zealand Herald of the following day carrying only a short review and acknowledging a few specific players, others couching their reviews in the bland un-emotional tone of the period. (“At intermission I spoke to a foreign expert from the country where they know about these things. He told me this was the best jazz I would hear in New Zealand and it was very creditable”)

One reviewer, confessing ignorance, said, “Being unused to jazz except as a background, I found it hard to tell one tune from another”.

Fortunately, standards of criticism and the more educated ear of today’s audience, jazz or other-

wise, allows contemporary listeners to isolate the various styles and artists in a more rewarding way.

After announcer Young's now deleted observation about the lights, he offers the first of his informed and humorous introductions to the music to be played, noting that the musicians are out to debunk the pre-conception that jazz is associated with dancing and that they are out to present "the creative side of jazz" to the public.

Young explains that this is music to be listened to and that “the musicians will take the tune, the group gives the first chorus a workout, then it's over to the soloist to weave a pattern around, but still in harmony with the original”.

The solos as entirely spontaneous, he notes, and the musicians can improvise freely.

The preamble aside, he introduces the first tune “which has been arranged by Julian Lee and the Burroughs Adding Company . . . Baby You Can Count On Me”.

The swinging arrangement which follows – letting pianist Crombie Murdoch play a hard-hitting solo full of falling cascades of notes – is typical of the music the night offered: swing-orientated, full of rich melodic flourishes and graced by the presence of Mavis Rivers who sang I Can't Get Started, How High the Moon, Dedicated to You and Boogie Blues.

Two of the tracks are particularly fascinating – Sweet Sue and Lady Be Good feature that rarest of instruments in jazz, a child's penny whistle (“worth sixpence” says Baker).

Judging by the response to these tunes, Swinging the Blues, Duke Ellington's Caravan and others of the 21 tracks, this was a night that was hugely enjoyed by the capacity audience.

They paid 3/6d a ticket (although hundreds were turned away, many offering 10/- to fortunate ticket holders, said Bert Peterson in the Australian Music Maker). And the historic value of of this concert cannot go under-scored. 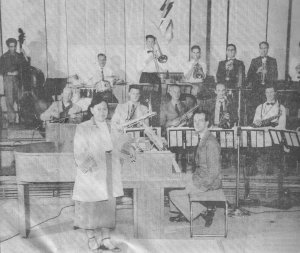 The musicians included some of the finest artists this country has produced (pianist Julian Lee established a reputation for himself in America where he became an arranger at Capitol Records, Mavis Rivers -- right, with the Crombie Murdoch Orchestra -- won plaudit from the likes of Frank Sinatra during her long residency in America, and players such as Murray Tanner and Mark Kahi became local heroes).

To have available again music of such good technical quality – the original cassette sleeve noted where the sound dropped out or there was feedback, the tapes now digitally remastered by Steve McGough for the re-release – can take the listener right back to that room to feel an energy and sense of occasion that is almost palpable.

As the New Zealand Herald review of the following day, in the moderate tone of the period, noted, “Had Ellington, Dorsey or Goodman chanced by the Auckland Town Hall last night they might have paused, listened and muttered – 'not bad'.”

It does seem a real shame however the reissue has edited out Young's comment in a dinkum Kiwi accent about those bloody lights. 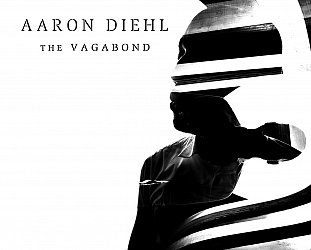 In a classic trio setting with bassist Paul Sikivie and drummer Gregory Hutchinson, the classically-trained and award-winning jazz pianist Aaron Diehl – still only in his early Thirties... > Read more