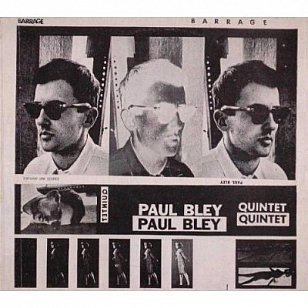 Recorded in one night in October '64 for the seminal free jazz label ESP-Disk (and initially re-presented in 2008 as part of their reissue programme), this selection of six pieces written by Carla Bley further illustrates how pervasive the influence of Ornette Coleman was at the time.

Not his Free Jazz album so much as his earlier Something Else!, Tomorrow is the Question and The Shape of Jazz to Come where vigorous atonality and melodic ballads existed in equal juxtaposition (usually within the same piece, as on his classic Lonely Woman from Shape).

Here the great avant-garde pianist Paul Bley -- and his group of trumpter Dewey Johnson, altoist Marshall Allen of Sun Ra's band, bassist Eddie Gomez and percussionist Milford Graves -- get down to the business of finding common ground on tunes like the ballad And Now the Queen (shades of Coleman) and the Bley's early signature tune, the frantically busy Ictus.

For much of this, Canadian Bley -- who had played with Charlie Parker in Montreal and recorded a trio album with Charles Mingus and Art Blakey over a decade previous as a 21-year old -- takes a backseat behind Allen and Johnson, but when he explodes as on Ictus and his particularly skittish work on Around Again you can hear him staking his claim as one of the great free players of the time.

The short pieces -- none more than five and half minutes, most a little over four -- don't allow for great extemporisation, but in their taut economy they are perhaps a decent introduction to the difficult territory that is free jazz.

Bley only recorded two albums for ESP-Disk and of the second, Closer in '65 -- with bassist Steve Swallow (who like Bley would become an ECM mainstay) and drummer Barry Altschul -- one jazz encyclopedia said it "should be in every collection".

Bley was getting to the top of his game with Barrage, it all came together on the more open setting of the trio on Closer.

Paul Bley is an absolute legend. It's amazing listening to everything from his 1953 trio recording with Mingus/Blakey, the 1958 recordings with Ornette, the amazing trio recordings for Savoy and ESP in the 60s, the quartet albums with Frisell/Surman/Motian in the 80s... funnily enough i just found a copy of Barrage on Trade Me!