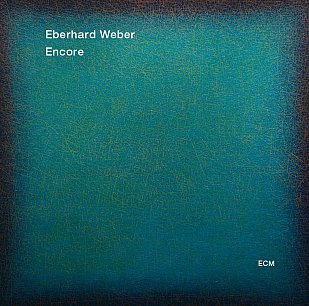 Unusually for an ECM album, this disc comes with liner notes in the form of an interview with Eberhard Weber, the bassist, composer, keyboard player and long-standing artist on the label.

The album finds him reunited with flugel player Ack van Rooyen who was on his debut album The Colours of Chloe in '73 and here Weber comments that now maybe van Rooyen is playing on his last album. He says -- because of the stroke he suffered eight years ago -- he is no longer able to play so . . .

These 13 pieces therefore -- as with those on his 2012 album Resume -- are drawn from his solos in concert with the Jan Garbarek Group (each carries the name of the city in which the concert was held).

Playing electric double bass (and keyboards in the studio), Weber manages to present -- given they were oriignally within the context of a band piece -- singing solos of wide emotional diversity with sometimes subtle references to world music, and the keyboard additions give a deeper textural feel.

There is sometimes great weight in Weber's playing -- the buzzing bottom end and rapid chords in Langenhagen for example -- but it was his ability to soar with the angels which is also evident here. Call them tone poems or miniatures if you will.

This much (mostly) solo bass will not be of wide appeal to casual jazz listeners, but sampled judiciously this is a fine testament to an inventive soloist and master of his instrument.