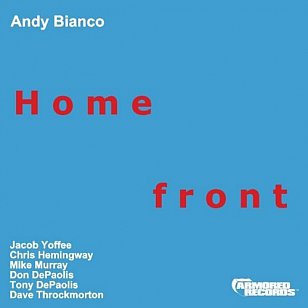 One we missed? Did we what!

Here's my recollection: This album -- originally released in the US in late 2013 apparently -- came my way some weeks after an e-mail from US guitarist Bianco in January of this year and it went into a large pile of pre and post-Christmas releases.

Bianco subsequently got back to me by e-mail in August just wondering . . . Politely.

And time passed until the jazz pile, which is refilled weekly, sunk down and there was Home Front, still patiently awaiting attention.

So it's apologies all round and now we have the chance to bring this exciting, post-fusion outing (which has picked up excellent US reviews for its focus and energy) to attention.

Pittsburg native Bianco's previous outing was the the great drummer Bob Moses' duo but here he confidently strides into the centre of the frame with a terrific line-up which includes in places tenor and alto, two different pianists and the grounded rhythm section of bassist Tony DePaolis and drummer Dave Throckmorton.

Among the many excellent originals here is boiling and angular Thermocline which Bianco opens with a sheen of sound and a brittle, stuttering melodic attack (not dissimilar to John Scofield's early work) but then winds it down discreetly and steps back to allow tenor player Jacob Yoffee to deliver a deliciously sensitive solo which starts somewhere in the early Fifties and scales its way briefly through post-bop . . . before pianist Mike Murray enters.

This piece -- a series of intelligently interlocked and co-dependent parts -- is a real journey, but also in some ways emblematic of the intellect and musicianship on display across all eight of these exploratory tracks.

At the other end of the spectrum is pianist Don DePaolis-penned ballad Song of the Changing Seasons, whose title alone hints at its theme. And here Bianco's playing has a precision which is appropriately climatic in its emotions as strong breezes blow leaves of notes around.

Pianist Don DePaolis errs to the slower moods again when he appears on his own lovely Hand Revealed Message which is open enough to let Bianco dance across the top with some beautifully sustained notes which find their echo in Chris Hemingway's bright'n'breezy alto solo.

Bianco -- who has doubtless heard and studied John McLaughlin's more restrained work in the Seventies and Eighties -- describes this album as forward thinking yet rooted in tradition, and that seems a very honest assessment.

Well worth checking out. You still can of course, it's not really "missed" just went missing for a while.

You can buy this album from his website here.

People like the great British bandleader/singer/trombonist and bassist Chris Barber were all but washed away when the British blues explosion and the Beatles/Stones et al came along in the early... > Read more