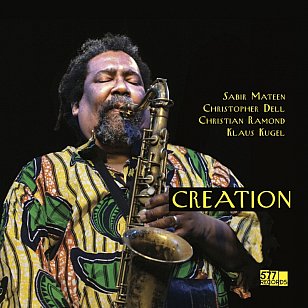 Saxophonist Sabir Mateen is 69 and can reflect on a life in improvised music playing alongside greats such as Cecil Taylor, Jemeel Moondoc, Sunny Murray, Henry Grimes and many others who advanced the project of jazz into free jazz.

He's also a member of the TEST collective alongside fellow saxophonist Daniel Carter.

If free jazz rose in the late Fifties and Sixties, reached a kind of apotheosis in the early Seventies then went into free fall in the Eighties when the players were marginalised by a jazz establishment under the thrall of neo-conservatives, it has hardly troubled Mateen who has continued to play and record either under his own name or with some of those in that impressive roll call above.

This album finds him with a German trio of bassist Christian Ramond, drummer Klaus Kugel and vibes player Christopher Dell.

Amidst the energy of this live, two-part 47-minute improvisation (with a third, 25 minute part on Spotify), the vibes are an unusual musical element in this genre bringing a less earth-bound feel to this music (as at the start on Part Two) which is mostly muscular and full of wrestling physicality by the leader, but also offering a unity of purpose with the German players who have worked together frequently in the past.

If you are entering this rewardng if demanding genre with trepidation start with Part Three on Spotify and work your way back.

Serving members of the armed forces are probably tough enough to dive straight in with Part One.

You can hear this album on Spotify here but also find the vinyl edition at 577 Records or order through Southbound Records in Auckland.