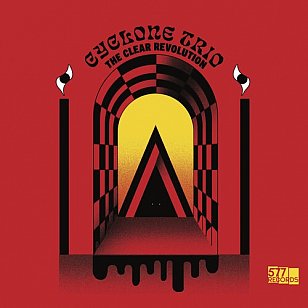 Elsewhere tries to be very clear when it come to free jazz/experimental music.

When we think it might be beyond the endurance of those who either don't know the idiom or is especially demanding for even those who do, we say so.

However, the recent albums by Cooper-Moore and Stephen Gauci (Conversations Vol 1) and Jorma Tapio and Kaski (Aliseen) we felt could be of interest to novices and the cognoscenti alike, so we said so.

Cyclone Trio – multiple-sax Massimo Magee from the UK with Australian drummers Tony Irving and Tim Green – are probably well toward the Warning/Turn Back end of the improvised music spectrum for most.

The double drum/sax configuration suggests as much, perhaps.

Them opening with the 23 minute-plus Inside the Circle would confirm that.

It's in the nature of such music that by virtue of its shape-shifting, idiosyncratic and sometimes visceral muscularity it's not only impossible to describe – tried describing a Jackson Pollock lately? – but sometimes also feels like being in an arm-wrestle while listening.

That said, the second piece here Trinosophile is much more approachable, although it is hilariously described on the TikTok site as “a popular song by Cyclone Trio” by someone who clearly hasn't heard it.

However the promo blurb from 577 Records of out of New York -- when attempting to speak of these three pieces which are mathematical in origin and inspiration – is no more enlightening and as funny.

They say of this and the closing piece Cardinal Points, “the triangular Trinosophile as a lover of threefold wisdom, and theunfinished square pointing to the four Cardinal directions”.

That's the kind of Anthony Braxton musical geometry and chess game most of us could never get our ears around.

Let it just be said that to Elsewhere's fairly well-attuned free jazz ears, The Clear Revolution album – recorded live in London as the Covid pandemic bore down – is a challenge on the opener Inside the Circle, invites you in with the more intimate 10 minute Trinosophile (not quite a hit single to be lifted) and then ups the stakes a bit more with the thoroughly engrossing Cardinal Points which really does carry for the full 17 minutes through extraordinary shifts of dynamics and emphasis.

The more brave might want to check out their 40 minute Cataclysm recorded live at the Cafe Oto the day before.

It's for those who ignore the Warning/Turn Back signs.

You can hear The Clear Revolution on Spotify here and might want to explore the 577 Records label at their website here.

577 albums can be ordered through Southbound Records in Auckland. Both London's Heliocentrics and their label Strut have an admirable practice of getting different artists together for projects (see here and here) and sometimes they just soar. This is one... > Read more