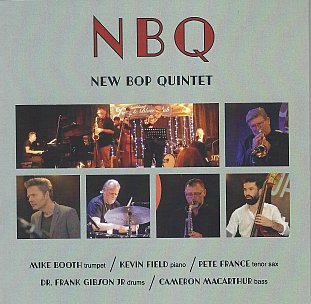 Although jazz morphs and changes as it assimilated other styles and sources, there are few key places it pivots back to, notably the classic bebop era of Monk, Miles and others.

That style – born in the Forties and dominant for two decades thereafter – threw out geniuses like Charlie Parker, Dexter Gordon, Dizzy Gillespie, Sonny Rollins and many, many more who defined jazz for most listeners.

They were soulful, tough, bluesy, swinging and restlessly inventive.

Little wonder then that this is a style which so many contemporary artists return to.

Collectively, that's about 200 years of playing experience brought to these classic tunes: Speak No Evil, So What, Round Midnight, Green Dolphin Street and Straight No Chaser among them.

There are however four originals here: Gibson's moody Beaver Fever underpinned by his supple rhythms and allowing for tight horn playing and a beautifully fluid solo by Field as it hits a finger-snap swing; and two by Booth, Lockdown which sounds like a newly minted mid-tempo bebop classic and the more romantically swinging Something Like It, both of which showcase the ensemble and his own trumpet.

MacArthur's 3Up/3Down is a generously quirky piece which allows Gibson some angular punctuations while keeping a busy rhythm behind the soloists Booth, France and Field, all of whom are also on top form as they drive the melodies into distinctive and different but interlocking directions.

It is a piece which swings powerfully.

A delicate standout is the quintet's treatment of the lovely Mal Waldron ballad Soul Eyes which is treated with affection and an understanding of its gentle quality.

Throughout we are hearing very accomplished musicians who were schooled on bebop, are at home on these tunes and bring their personalities to an idiom which is never rendered redundant by time but challenges at every turn, and leaves lesser players in its wake.

This is an excellent, straight-ahead collection of bop standards with original tunes which slot into the idiom seamlessly.

Elsewhere has a number of interviews with Frank Gibson Jnr and reviews of his albums starting here.