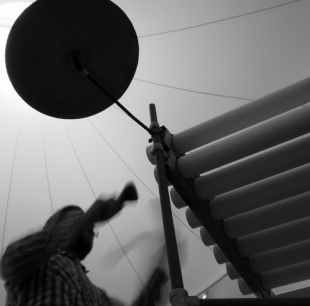 Some music requires, insists on and even demands a different kind of listening.

So it it has always been with From Scratch, the percussion ensemble which formed in the mid Seventies around its sole constant Philip Dadson and which has morphed into different configurations and musical direction in its – all too intermittent – performances since.

An appearance by From Scratch has always been much more than a performance however, with the staging of the unusual instruments (many handmade and fit-for-purpose) there is an architectural and sculptural aspect to the way the players occupy and articulate the physical and emotional space in which the music is created. 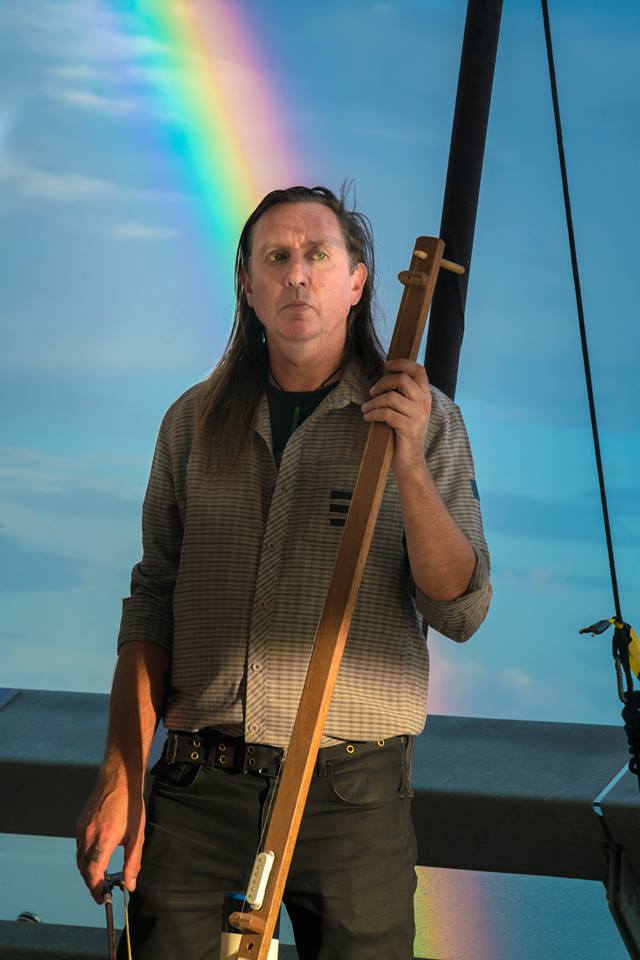 So their art has often been best appreciated in an art space, as it is at the Te Uru Waitakere Contemporary Gallery in Titirangi for their Heart'Heart performances – two separate programmes this weekend and March 23-25, all sold out.

Each of the programmes includes their works Global Hockets, POWWOW and Drum Wheel (with improvised passages) as well as two piece with collaborators, this weekend's with Dan Beban and Neil Thomas (of Orchestra of the Spheres) and electronica artists Mike Hodgson and Paddy Free (who are Pitch Black).

As an ambulatory evening with performances taking place in different parts of the Te Uru galleries, the evening began on the roof with magnificent views of the Manukau Harbour in the southeast.

And a glowering black sky further up the compass.

The location and evening light lent a sense of beauty and drama to the opening sequence in which Indian-like drones from handmade instruments (bowed strings) set up an ambient sound and then four drum-cum-wind instruments were carried by performers to the centre of the rooftop space, the wind aspect evoking a dark Tibetan chant tone and the spun drums bringing a stentorian and urgent, ritualistic aspect. 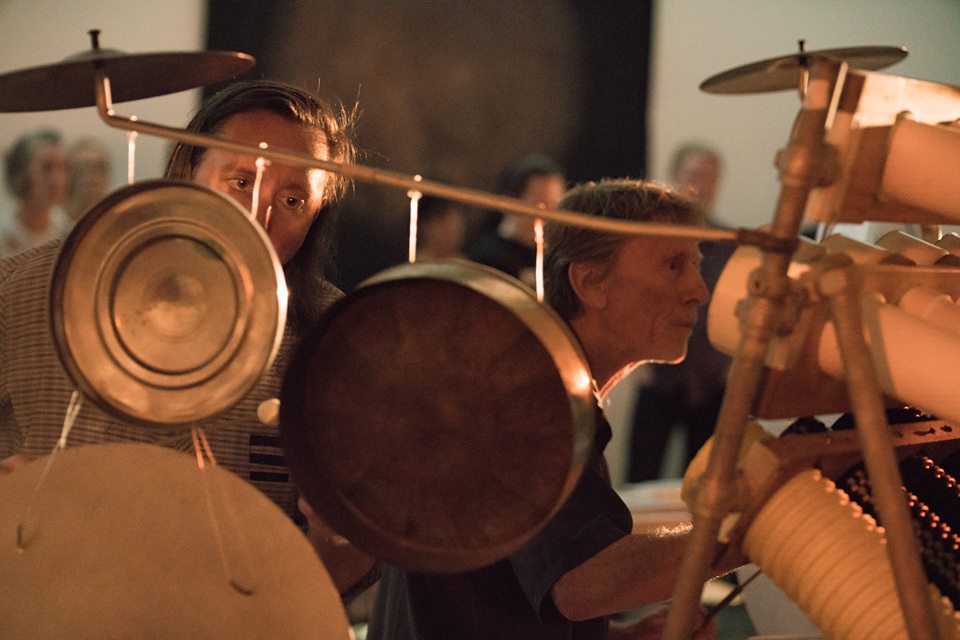 This sense of the “holy moment” – where attention is focused acutely and the outside world is relegated – is broken by a massive crash in the manner of how Chinese music and ritual (and fireworks) chase away bad spirits.

If nothing else, From Scratch could always create a sense of occasion. And this opening gambit certainly had that effect, before the players lead the procession of the small audience (about 50 at a guess) down the stairs to the first event in a gallery space where the installation of the From Scratch posters, photographs artwork and films around the walls is a stand-alone exhibition. 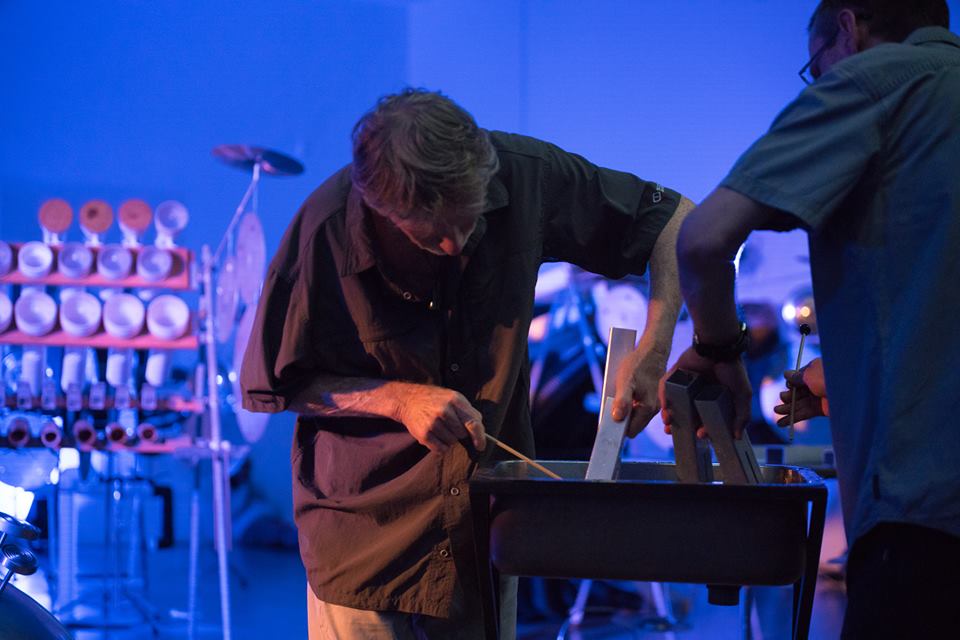 Comparisons are odious but for those who are unfamiliar with From Scratch – who didn't perform for 15 years after 2002 – some reference points may be useful.

The performance of the players – sometimes just three, at other times an ensemble of seven (with Carol Brown at one point dancing like a Sufi dervish wearing a a bodice of tubular bells as yet another instrument) – turn physicality into performance and the melodic mathematics of the rhythms into aural art. 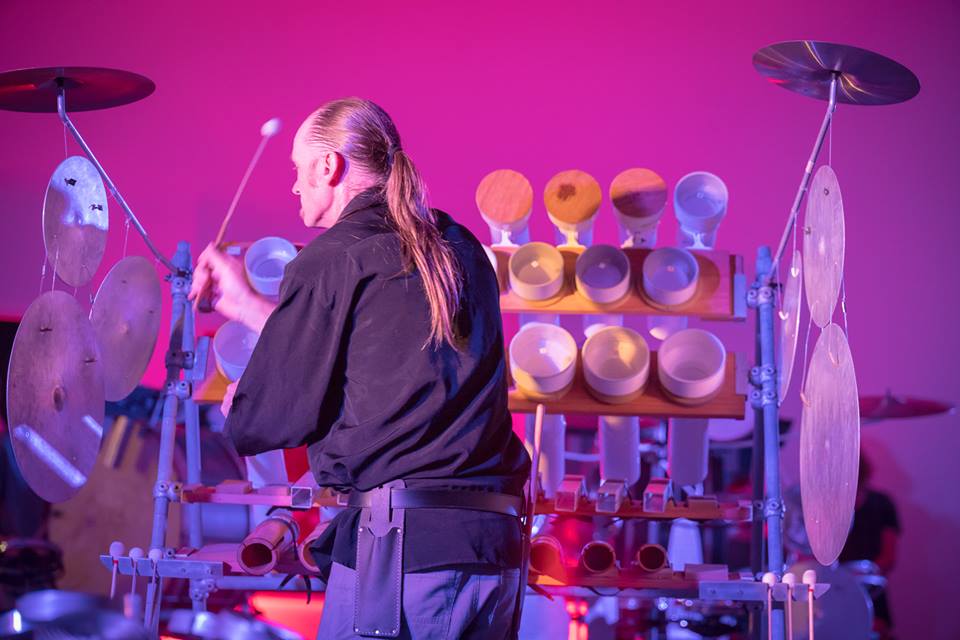 At times the sound of the various gongs, drum stations, their famous tuned PVC pipes slapped with jandals, plus bells, tuned bamboo tubes and various other instruments evoke Indonesian gamelan, Hopi drumming, the dark electronic sound design of Hans Zimmer's music on the recent Dunkirk movie (even without the input of Hodgson and Free), Steve Reich-like minimalism, the sonic sculpture of Len Lye, Pacific log drumming . . .

Among many other reference points in your aural experience or subconscious. What binds all these together – and they are not of course specifically any of those things, these are merely allusions to assist – is the strenuous energy required to shift these dynamics, rhythmic patterns and melodic patterns.

The players have to have a Zen-like singular focus and enormous stamina.

This is music with muscle memory. 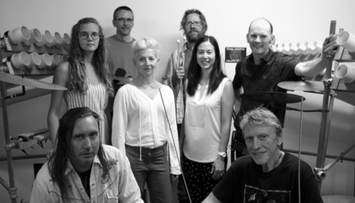 The dynamics may change – from a tickle of tapped rectangular metal tubes in water and quietly droning wall wires to the thunderous crash of cymbals and the players cannoning around the standing kits of staccato snare drums – but the evolving music unfurls, changes its shape and sonics with seamlessness. 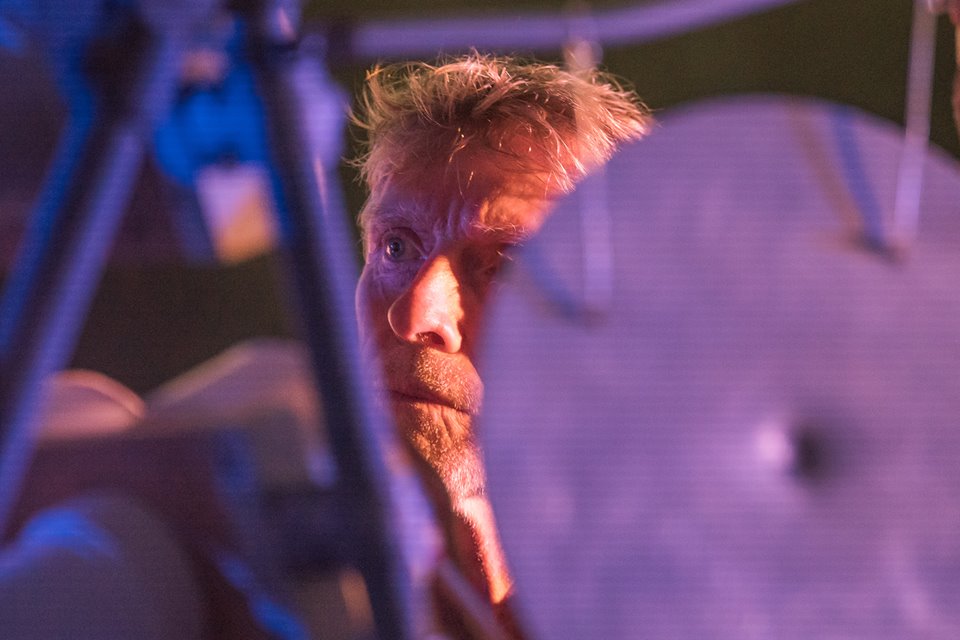 The collaboration with Hodgson and Free opens up the musical palette even further.

From Scratch present a choreographed sonic event unlike any other ensemble and create music which requires, insists on and even demands a different kind of listening.

And rewards at every turn.

To end the event, performance, occasion – call it what you will -- a dozen or so ceramic plates are spun on the gallery floor and as each loses momentum they create the sound like wash of cymbals before, one by one, they drop out to leave just the final plate vibrating and resonating before . . . 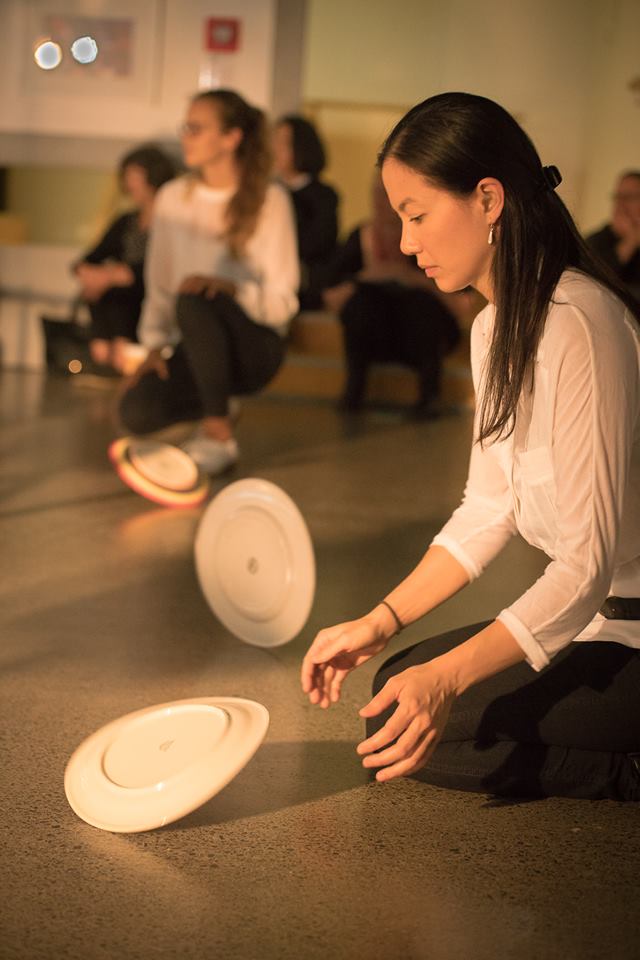 Then spontaneous clapping and whoops from the small audience around the gallery walls.

That moment of silence – like the knocking on the gate in Macbeth after the preceding gut-tightening tension – cracks the aural space and brings the audience back from individual engagement into the collective show of appreciation for a series of performances which have provided tension, discipline and drama, wit, nuance and intensity . . . and spell-binding, even quite magical, music.

And a different kind of listening. 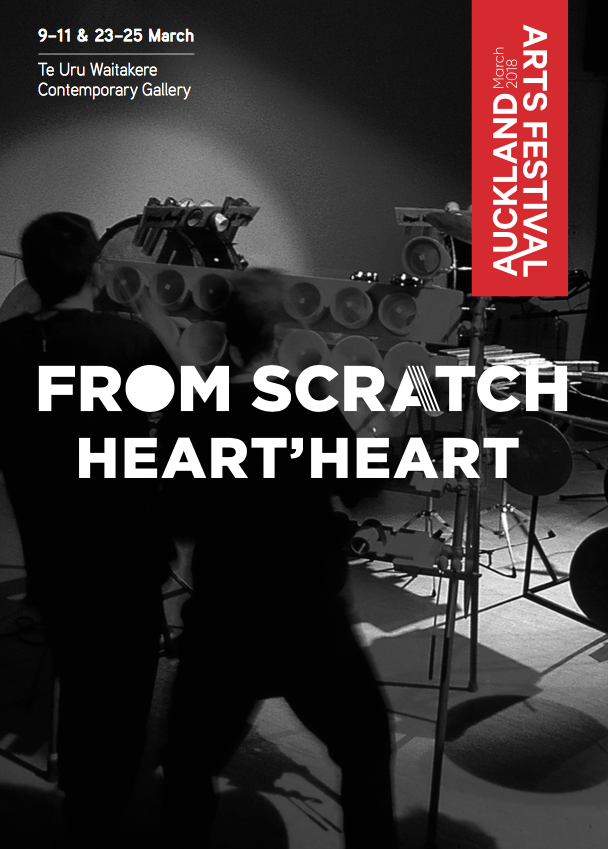 It was a special show. Highlights for me were Dadson with the aluminium (?) blocks in the water-filled sink (4th photo), making sound patterns that reminded me of tui or bellbird song, and the piece with the Pitch Black electronic throb (I hadn't done pre-reading, didn't know they would be there).

The plate finale was great. A little lesson in sonic entropy.