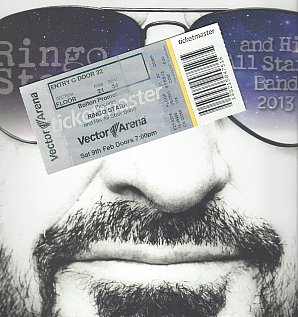 Given that previous incarnations of Ringo's All Starr Band included members of The Band, Joe Walsh, Nils Lofgren (a one-time solo act, now of Springsteen and Neil Young groups), Ian Hunter (Mott the Hoople) and other luminaries, this line-up looks like the B-team.

Although they have fine pedigree -- Todd Rundgren (who played an indifferent and undersubscribed show here in late 2010), Steve Lukather (session guitarist and founder of Toto), Greg Rollie (the keyboards and voice of early Santana, then Journey) and Richard Page (of short-lived Eighties MOR rockers Mr Mister) - just don't have quite the same cachet.

And their diverse backgrounds made for a show which spun weirdly from Sixties nostalgia (Ringo with Honey Don't, I Want To Be Your Man, Yellow Submarine etc), Latin-flavoured rock (Rollie taking lead for Santana's Evil Ways and Oye Como Va) to Eighties FM radio (Toto's Rosanna, a flat treatment of Africa, Hold the Line, and Mr Mister's ballad Broken Wings).

Into this was squeezed Rundgren who presumed his songs (the great I Saw the Light done a disservice) were better known than they are.

Holding this together, however, was the trim and healthy 72-year-old Starr who provided humour ("What's my name?") and singalong songs.

Constantly flashing a peace sign, he kicked things of with It Don't Come Easy, joked that only four people bought his last album Ringo 2012 (then unfortunately sang the reggaefied Wings from it and later the dreary if well-intentioned Anthem).

He introduced Boys as a song "from that other band I used to be in [loud cheering] ... Rory Storm and the Hurricanes" (a reference to his pre-Beatles band) and such quips -- doubtless well practised -- were appreciated.

But any show which gear-changes between rock 'n' roll (Boys), pub singalong (Yellow Submarine), Black Magic Woman (Lukather shining in a such setting), the countrified Honey Don't, the leaden Anthem, a new ballad by Page then into Toto's Africa, sounds like a setlist programmed by someone with a short concentration span.

The musicianship was (mostly) undeniable but too often this came off as a very good covers band "featuring the original artists", which I suppose it was.

Ringo must have felt the love as the audience sang along to his melodically simple and lyrically memorable songs (anyone can hold the tune of Act Naturally and enjoy bellowing With a Little Help from My Friends).

But in a stop-start, stand-sit-stand again show nothing gelled for any duration.

So, an unusual and interesting show.

Interpret that as you will.