On the release of excellent recent albums by Wellington pianists Kevin Clark and Charmaine Ford, and Auckland saxophonist Brian Smith I have noted what a rare year it is shaping up to be in New Zealand jazz. And here is further evidence -- but something very different to those mentioned.

Ryan was once the songwriter/keyboardist in the Narcs in the early 80s who were much beloved by radio programmers and the people, but widely disparaged by critics for their soft-rock tendencies.

Those days are well behind Ryan and now he moves in rather more musically rarified circles: this album of groove-orientated, easy stretching jazz underpinned by Ryan's electronic keyboards includes contributions from Midge Marsden on harmonica, DJ Poroufessor on turntables, saxophonist Cam Allen, drummer Steve Garden, trumpeter Grant Mason, slide guitaist Derek Jacombs and others who have cut their teeth on jazz and blues in dozens of sessions and bands.

The title might suggest some earthy blues transported to Aotearoa, but this is more smooth and cruisy than that, despite the odd vocal sample from Alan Lomax's field recordings of the 40s.

So set aside expectation (post-Narcs pop, hardcore blues, whatever) and settle in for this loping, gently explorative 10-track album which reaches back to the more mellow side of 70s jazz-fusion, has nods to Cuba and Brazil, and will (aside from the more thumping Blues Fell This Morning) drift by in a warming glow. 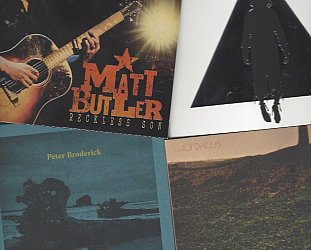