For years Armatrading - whose job description includes folk, reggae, rock, jazzy pop and so on -- had been promising herself she would write an album of songs within the the same genre.

This is it, her "blues" album.

But far from being a monochromatic trawl through same-same songs in a blues style she brings her inclusive musical intelligence to 13 songs which reach from Chicago-style to gospel, from raunchy tracks where she seems to be channeling the spirit of John Lee Hooker to quietly stinging BB King guitarwork, to . . .

But is this diversity any good?

Well, a couple of weeks after its release it topped the Billboard blues charts, the first time an Armatrading album has done serious business in the States for decades.

It is still very much an Armatrading album, that earthy voice by turns raunchy and sensual (the lusty Liza and Deep Down), at other times riding on questioning (the gentle Secular Songs about the absence of God and hymns in English churches) or self-doubt.

There's an autobiographical piece (Mama Papa) and it goes out with a ripping eight-minute Something's Gotta Blow where she fully unleashes her guitar playing.

Armatrading wrote, sang, played every instrument (aside from some percussion) and produced this herself. The pleasure she took in it is evident everywhere. 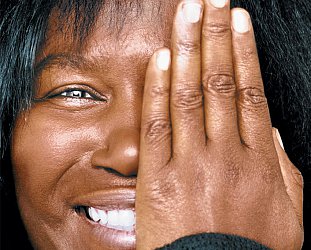 Joan Armatrading makes an embarrassing admission for someone whose most recent album Into the Blues debuted at number one on the Billboard blues charts: she doesn’t listen to the blues and... > Read more