The Darlings are New Zealand singer Jackie Clarke and singer-songwriter Callie Blood with drummer-to-the-stars Wayne Bell, here mostly playing acoustic guitar -- which makes them somewhat of a Kiwi supergroup given their long pedigrees in various band and studio sessions.

Together they make what their bio calls "grown-up pop", which is a very apt description given the classy and classic harmonies here (think Beatles, girl groups, Bacharach) and tinges of alt.country brought into memorable songs which could have stepped out of the mid 60s (or mid 80s when pop melodies reclaimed the ground from post-punk).

They aren't shy about tossing in an 80s sky-scaling guitar solo (Brett Adams) either, but this one is at its best when restaint rules -- as it mostly does.

There is a retro feel about much of what is here (is it just me or that a smidgen of Pat Benatar balladry in there?) and if it doesn't take the risks it might then that doesn't really diminish an album that is long on pop hooks and songs which grab after a first hearing. 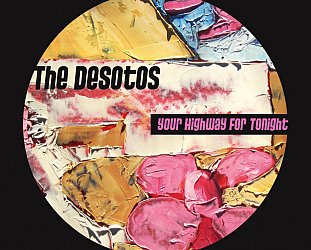