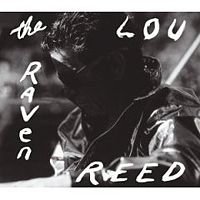 "These are the stories of Edgar Allen Poe, not exactly the boy next door," yelps a breathless-sounding Reed over dramatic, grinding guitar riffery at the start of this guest-heavy collection of diverse songs and spoken-word sections which explore the works of that peculiar, melancholic American writer with whom Reed feels great affinity.

It's an unpromising start but, somewhat surprisingly given the ambitious nature of the project, Reed and helpmates (who include Laurie Anderson, saxophonist Ornette Coleman, the McGarrigle sisters, actors Steve Buscemi and Willem Dafoe, and David Bowie) have crafted a collection which steps between dramatic recitation, concept album and dark rock'n'roll.

The Raven comes in single and limited edition double-disc versions and, again surprisingly, it is the double set with 18 songs and 18 spoken-word tracks which is the better by virtue of its breadth. If nothing else you get the full, chilly nine minutes of Dafoe and others in a sound-effects-backed enactment of The Fall of the House of Usher.

Throughout Reed mixes his own lyrics with words and stories by Poe (of death, decay, suicide and graveyard humour), the music veers from eerie cello or electronic backdrops in the spoken-word sections to full-throttle rock'n'roll (that queasy start) and references to his early post-Velvet Underground career. The gritty and minimal instrumental A Thousand Departed Friends could have come from The Bells, and he reconstitutes his own The Bed and Perfect Day to fit the programme.

It is, however, irritatingly uneven.

In places Dafoe reads too hastily for Poe's language to be fully appreciated and it's possible to argue Reed, who sounds feeble of voice and unintentionally off-key in places, is the weakest link here and sometimes close to self-parody. (Change is just embarrassing.)

But often enough it takes you to the dark places although Reed has Buscemi drop in a lounge-act routine in Broadway Song (apropos of nothing, but no matter) and brings out the funk with Coleman on Guilty.

The Raven is not as fully satisfying as his collaboration with John Cale on the Warhol-inspired Songs for Drella or the song cycle Magic and Loss. But it is certainly dark, different and demanding.

The cover where he dresses as some sandal-wearing, sword-wielding, trouserless eccentric in an overcoat is hilarious.