Various: Born to the Breed, A Tribute to Judy Collins (Wildflower) 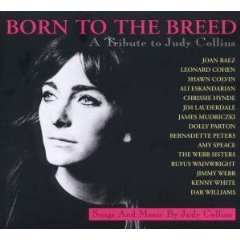 These past few years there has been something of a rediscovery of old folkies, what with Springsteen paying tribute to Pete Seeger, the various Woody Guthrie compilations, Bob Dylan's radio show (he's something of an old folkie himself), new albums by Ramblin' Jack Elliott and Larry Jon Wilson, collections like If You Ain't Got the Do-Re-Mi and Sowing the Seeds . . .

Not to mention young bands like the Felice Brothers and Fleet Foxes (among others) whose music is grounded in older traditions.

No surprises then that Judy Collins -- one of the queens of Sixties folk, alongside Joan Baez -- should get a long overdue tribute from the likes of Shawn Colvin, Jim Lauderdale, Dolly Parton, Rufus Wainwright and others, including Leonard Cohen whom Collins encouraged to sing his own songs and introduced to his first major live appearance in 1967 (on the strength of which he was signed to Columbia by John Hammond).

The surprise is that this hasn't happened sooner -- and that it was prompted by Collins herself after Chrissie Hynde said Collins' My Father was one of her favourite songs . . . and Hynde's piano-backed treatment is a highlight here.

I doubt Collins had much difficulty finding these others who admire her songwriting skills for her songs often have narrative-driven, emotionally deep lyrics which must appeal to the likes of fellow songsmith Jimmy Webb (always an acquired taste as a singer and his over-wrought version of Fallow Way here won't be persuasive), Amy Speace, Joan Baez and Parton (whose countryfied version of Fisherman's Song may take a little getting used to but is ultimately fun in this somewhat soul-baring context).

High points are many but among them are Speace's take on the moving title track, the Webb Sisters (Cohen's singers) on Fortune of Soldiers, Jim Lauderdale getting in to Easy Times ("easy times come hard for me") and the unexpectedly techno-backed Che by James Mudriczki (whose vocals are extraordinary and give Antony a run for his money in the soaring-fragility stakes).

And of course Cohen who takes out the 15 tracks with a spoken word treatment of Since You've Asked.

However Bernadette Peters going the whole Broadway/Phantom on Trust Your Heart -- which leads into the Webb track -- might have you leaping for the fast-forward just after the mid-point.

Those aside, this is fine tribute to a singer-songwriter who has largely, and unfairly, been consigned to a footnote when people speak of Sixties folk. That there is a song here about Sarajevo reminds you that Collins has still beeen crafting her moving songs while we were mostly looking the other way.

Time to get locate a copy of Collins' Wildflowers album of 67. 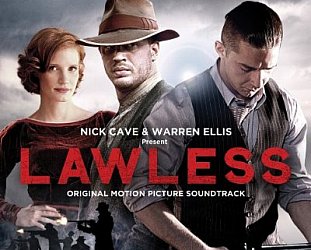