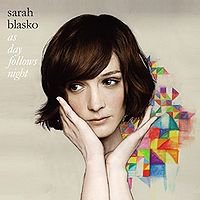 In what looked like a joke, a recent issue of the Australian Rolling Stone described Sarah Blasko as "music's most reluctant star" in the blurb above a story which ran for pages, included a lot of intimate and arty photos, and had the singer-songwriter extensively quoted.

As "reluctant" goes it was hardly in the league of Greta Garbo, Howard Hughes or Scott Walker.

Still, we mustn't judge artists by their publicity and Blasko's sensitive, literate and cleverly arranged songs (closer to Rufus Wainwright in cabaret mode than Joni Mitchell) do suggest a pensive and slightly melancholy soul who might prefer to shun the light of public scrutiny -- this despite a seemingly confessional quality that runs through many songs.

There is a winningly simple melodicism at work here and although her voice is often light and full of slightly twee innocence, when she pushes herself her vocals can be forceful and as the strings rise behind her she seems to gain even great power and emotional momentum.

Recorded in Stockholm and calling on musicians who seem to understand this gently dramatic cabaret/Marianne Faithfull/film-noir/sweet soundtrack style intimately, this is one of those immediately appealing but deep albums which will have some longevity.

For all those soundbed components (nicely prominent and melodic but not overbearing drumming), Blasko keeps her ears firmly planted in pop structures with songs which are as chock full of hooks as any Kate Bush, Bacharach or Camera Obscura pop song and memorably simple lyrics: "hold on my heart" "is my baby yours?" "we won't run, we can fight" will come to you after a first reference.

Love -- and especially its loss -- is her theme but here is optimism (as the title suggets) and in a world getting mighty crowded with not dissimilar voices and slightly uneasy girl-women singers wearing cardies, Blasko really does stand out on the strength of this album.