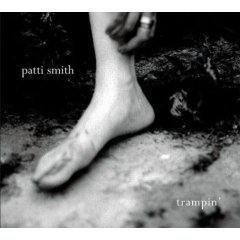 For over a decade now each new Patti Smith album has been hailed as "a return to form" - and this one is no exception. It has picked up five-star reviews in many magazines from senior rock writers dragged out to consider one of their peers, the woman who shaped their listening, the one often lazily referred to as the poet laureate of punk.

However, when you look at the reviews it's interesting what they don't say. Most reviewers don't "review" but essay. They write the piece they've always wanted to write about her, namechecking the poets and artists whose names Patti unfailingly drops in conversation (Rimbaud, Dylan, Bill Burroughs etc). This is being an intellectual by association: "See, I've read Beaudelaire's Les Fleurs du Mal, too."

There is usually also some reference to her astonishing debut album Horses, some banner-waving of her as a true original and punk priestess, and mention of the tragedies in her life.

What seldom gets a mention is how godawful and leaden her music has become, and that intellectually and lyrically she seems to have been jogging on the spot. And that her free-form poetry has become portentous and heavy with its own self-importance. But Patti's position in rock culture is so assured and so inviolate that pointing out these rather self-evident facts would be akin to bellowing, "Who will rid us of this meddlesome priestess?"

And so it is with Trampin', musically the equivalent of a cut'n'paste from Patti's backpages and full of her rock'n'poetry gestures which are sounding increasingly threadbare.

As Ian Penman noted in a courageously dissenting review in The Wire, "It sounds like she hasn't heard a single thing outside her own music for about 25 years".
And just as on her last album Gung Ho she belatedly hailed Vietnam's revolutionary leader Ho Chi Minh (25 years after the liberation of Saigon) on Trampin' she salutes ... Gandhi?

Didn't Sir Dickie Attenborough get here over two decades ago?

But of course it starts quiet then gets into impassioned yelping ("People awake from your slumbers"), and mentions Martin Luther King, so that must pass for relevance and insight. Or maybe not.

There's also My Blakean Year and Peaceable Kingdom as other lit-rock references for the essayists to exercise themselves on.

The title of the swirling 12-minute Radio Baghdad recalls her earlier Radio Ethiopia but follows her now familiar pattern. There's the whispered "poetry" at the start (the Doors anyone? Gung Ho part deux?) about Baghdad, once a city of scholars, the Led-Zep rock thump which provides the substructure for some babble full of pregnant pauses which are meant to convey emotional intensity: "We invented the zero ... and we mean nothing to you ... " she wails, then roars, "shock and awe ... like some ... like some ... imagined ... warrior production ... "

Frankly, it just sounds full of itself and smug in its own self-inflating myth-making.
Is saying sending bombs to Baghdad "is like some crazy TV show" really that insightful? Jeez, you and I have probably said that.

Oddly enough, when her energy is reined in the emotion sounds deeper and more affecting, as on the simple title track over solo piano, and the 60s pop balladry of Mother Rose and Peaceable Kingdom.

Doubtless her rage brushes up thrilling on stage, when the moment carries the somewhat familiar moralising and messages, but as an album Trampin' is just more of the same -- but less so.

In these troubled times, Patti Smith's sometimes visionary work has perhaps never been more required, but here she has seldom seemed less relevant.