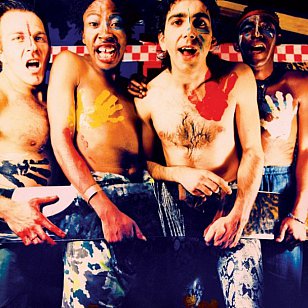 Although the unearthing of long forgotten -- if ever-known -- bands, genres and marginal artists has become the norm these days (another week, another cult artist you'd "always been into"?) it has to be said every now and again something comes along you sit up and pay attention to.

So it is with this mixed-race band which formed and briefly played during South Africa's apartheid-era and fired off incendiary politicised punk.

Former a couple of years after the uprising in Soweto, they created a furious brew of hard rock, reggae, punk and free-form jazz which came with gut-punch/ear-bash/brain-engaged guitar work by Steve Moni.

They only released one album (according to the thorough liner notes here it sold a paltry 700 copies before being withdrawn under government pressure) but they played live a lot (unnanounced shows and sometimes under the watchful eyes of officially sanctioned media and edgy police).

Needles to say they didn't last long but given the political climate, theirs was a courageous stance and proved to be influential on other musicians.

Their album was released in South Africa just two years ago and of course most there heard it for the first time.

Of course it might sound musically dated and locked in its period, but you cannot deny the visceral thrill of much of this -- 14 songs making an expanded edition of the original album -- or the energy and lyrical courage on display.

Singing a political piece entitled Black Punk Rockers in South Africa in '80 must have been a whole lot harder than singing something similar in South London at the same time.

Makes wearing a polite ribbon on your jacket or carrying a message in felt-tip on a placard seem a little wimpy.