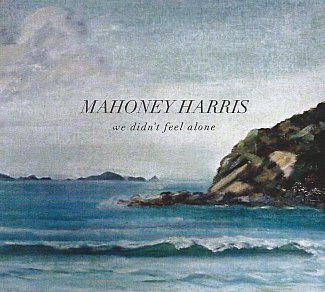 At the midpoint of this debut album by Auckland singer-songwriter Mahoney Harris there is a lyric that can stop you in your tracks: just when you think you've got her pegged there is Miss You.

On a cursory listen this piece -- which comes with an elegant musical setting with guitar by Tom Healy -- seems to be a piece about a former partner: "What would you say if I saw you today, would you be happy to see me . . . if you were around would I be the same, would we be thick as thieves or strangers . . ."

And then "I miss you, you're everything".

But the next verse, if I am hearing right, is a shift of subject and what American poets used to call the "emotional leap": "Now I have one of my own . . ."

And we are in very different territory and it's "Father, would knowing you explain the doubts that remain . . . I'm not the sum of your lacking"

This is an extraordinary revealing lyric which Harris delivers with weary flatness which only enhances the emotional ennui . . . and then "I'm older now, no smoke and mirrors . . . I miss you . . . I'm older now . . ."

This is one of those rare songs where the listener will fill the gaps, but Harris has given the outine.

And then as her unacompanied voice ends on "I'm older now" the next song starts equally bare: "My heart is an open door . . ."

As a centre-piece segue this is remarkable.

To get to these however -- but when you do you might fold back and rethink what you've heard so far -- there are some sensitively arranged but somewhat under-developed songs: the opener Real Deal (despite the musical setting which includes Keoghan on violin) is too flat to be engaging.

And here in the cliche "real deal" you realise sometimes Harris opts for a familiar phrase (later we get "barking up the wrong tree" and "clear as a bell" on the catchy Give Me) when more original writing is clearly available to her, as on Miss You and the quietly terrific Do You Know the Way to Go From Here? which (despite "can you see the forest for the trees?") is elevated by astute writing, subtle electro-clatter and crystalline guitars.

Every now and again you might also get the impression she can write interesting words on a page which don't scan quite right in a song (free verse and songwriting are every differen crafts) but when she nails it you can be utterly seduced.

The imagistic writing on That Day has lovely resonances of love: "Tuis waxing lyrical, we stopped among the trees, the gesture of the moment . . .you placed your Swanddri on the damp earth, we lay upon it like we were the first, I looked up to your face in a halo of dappled light . . ."

If that isn't a recollection of love and simple seduction in a stolen moment then it's hard to image ine what might be.

But if this album has a problem it's that everything is mid-tempo, earnest rather than sometimes celebratory (as shimmering moments of love could be) and that, as with so many singer-songwriters, there is the relentless you-me-I perspective.

Over the full sweep that introspection and sharing of personal perspectives (who is the "you"?) here undermines the singularity of some song: Who Are You? is another fine piece worth pulling out of the context.

And stick around for the terrific title track at the end which works somewhere between that self-reflection, ethereal drone folk and lightly jittering trip-hop.

That middle section and the closing overs are where the most affecting, emotionally engaging heart of this album lies.

Really lovely, the kind of artist / lyrics / melodies that I suspect reward the more you listen. Reminds me of Jan Hellriegal in some ways, who I note Wayne Bell has also worked with. Enjoyed Mahoney's questionnaire answers too :-)