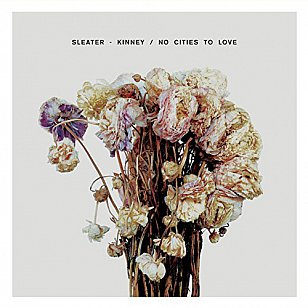 If you are bit over bands reforming to tour their classic album or just to pick up the cheque, then put aside such cynicism for this, the return album from former riot grrrls Sleater-Kinney who broke up a decade ago and seemed to have gone their own ways.

But from the thrilling, fuzzy riff on the opener Price Tag here right through the furious 33 minutes which follow, here's a band which has not forgotten what drove them in the first place and -- with all the stabbing energy of Gang of Four, the blazing passion of Siouxsie Sioux and the drama of Hole at their (rare) best -- this collection is almost breathtaking in its energy and commitment.

It also reminds you how faint-hearted, insipid and just plain dull so many young women artists are these days. For many it's as if they gave up before they even started . . . and Sleater-Kinney's firepower is just going to make them cower even further into their post-folk shells.

This is an album that means it . . . and that "it" is not just taut, short songs full of angles and choruses, but actually saying something about the society which it finds itself in.

That opener addresses the personal/domestic ("the bells go off . . . the fabrics itch, the fit's a little rough . . . I scramble eggs for little legs") to the broader demands of consumer culture ("the system waits for us, I stock the shelves . . . the products all light up . . we love the prices so low").

Elsewhere there is a merciless skewering of an emotionally failed man (Fangless), accelerating metaphysical pop with a nod to Lena Lovich (the questioning A New Wave: "Every time I climb a little higher, should I leap or go on living?"), self-anaylsis and optimism amidst disillusion (No Anthems) and metal-edge melodrama on the closer Fade ("If there's no tomorrow, you better live").

Throughout, these songs bristle with stiletto-sharp guitars, electro-static energy and thunderous but tightly focused drumming.

If, as John Lydon once said, anger is an energy then so is the need to prove the rage, passion and presence all over again for this always remarkable band.

They certainly take their own advice from Fade: "If we are truly dancing our swan song, darling, shake it like never before".

I suspect this is no swan song.