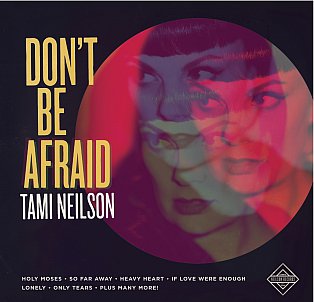 The backstory to this album -- how Neilson's singer-songwriter fatherRon  died earlier this year, a little over a month before she went in to record -- has been much essayed, and she mentions it in the brief liner notes.

But far from being a maudlin collection (some songs were written already) this typically excellent collection kicks up its heels at times, notably on the lively Latin-influenced Loco Mama.

Laugh Laugh Laugh also sounds guaranteed to get everyone on the dance floor.

Over previous albums Neilson's vocal command has effortlessly ranged from classic Fifties pop, country and blues to soul, and it is the latter which opens this collection, the soul-stirring but country-edged title track which was the last song her father ever wrote.

Finished off by Neilson and her songwriter/producer brother Jay, it is also impelled by a gospel spirit in which the songwriter speaks from the great beyond: "I'll be there to protect you . . . you're my child and you belong to me".

It is an extraordinarily compelling opening statement, and she channels soul-country on the belting follow-up Holy Moses -- also co-written with Jay -- where you can imagine a hot afternoon in a steamy Southern Baptist church when someone steps forward from the choir and rages against the tribulations of this world: "No time to cry when the babies need feeding . . . Holy Moses, have mercy on me".

Bury My Body is another blues-infused gospel soul meditation over haunting drums.

Among the many delights of any Neilson album has been when she goes back to the Fiftes for classic sounding country-pop and here the duet Lonely (with Marlon Williams) is another newly polished diamond in the genre, musically located somewhere between Bobby Vinton's Mr Lonely and the mature perspective of Patsy Cline and Roy Orbison. It was another one of her father's they finished.

Another in this vein is If Love Were Enough where Neilson acknowledges love isn't enough sometimes ("if love were enough, there would be no end, you'd stay to see baby boys grow into men") and confirms again what an adult, sophisticated lyricist she is. It's a song which works as a farewell to a loved one passing or someone walking out the door.

And that man appears right at the end with his one minute demo of Don't Be Afraid, his fading voice frail as death held his hand.

Although this is clearly Neilson's show, she carries such great musicians and collaborators with her they can't go unacknowledged, among them are guitarist Dave Khan and Delaney Daviudson (whose So Far Away is another highpoint here), pedal steel player Red McKelvie, bassist Ben Woolley and drummer Joe McCallum.

Tami Neislon has won a shedload of music awards but when you hear the sheer quality of writing, singing and arrangements on an album like this you couldn't deny her even more.

Hard to think of another artist whose quality control has been set so high.

Nice audio clip and video clip - especially the audio clip. I hadn't really noticed Tami Neilson before. On the strength of the audio and video clips, I think this is a CD worth having. I see from the JB HiFi website that Tami Neilson has four other (earlier) CDs available, all of which are now on my wishlist on the JB HiFi website pending time becoming available to look for tracks from them on the internet to listen to.

I really enjoyed Tami's last album - Dynamite!, but on the strength of these tracks, it sounds like the new album will be even better. We might be dealing with an artist whose work, while diverse in its range of styles, can legitimately be referred to as "timeless". Although this Auckland-based trio bill themselves as alternative-folk, grey-haired Anglofolk followers will hear in them something which was once mainstream acoutsic folk, back in the days when... > Read more