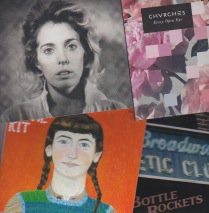 This is the Kit; Bashed Out (Brassland): Although much acclaimed in UK folk circles, this third collection of literate songs by Kate Staples and some steller players (which includes the Dessners from The National) barely rouses itself past a sleep-walking pace. Words like "intimate" and "personal" abound in reviews and while that is true you may sometimes feel shortchanged by Staples' unwillingness to project more. It's also true that this requires living with so that its layers gently open over time, but to these ears this is also a path much explored. Live reviews are highly favorable and it's clear this gets pumped up larger at that time. Judgement suspended, one very much down to taste.

Chvrches; Every Open Eye (Goodbye): Given the evidence of this follow-up to their excellent debut, Chvrches don't live up to their rep as the great new sound of smart electropop out of Scotland and come off as a rather over-hyped band which people are desperate to like. Because this is, in many places, quite an ordinary amalgam of electro and pop. There undeniably excellent songs here (Never Ending Circles, Leave a Trace and Keep You On My Side are three compelling if fairly familiar triple punches to open proceedings). Elsewhere you can hear them reach back to the more obvious Eighties influences for inspiration (Make Them Gold, the dull ballad High Enough, the soundtrack-song-in-waiting Afterglow). Nods to Moroder disco (Clearest Blue) are also evident, but while singer Lauren Mayberry is a powerful contender, after the midpoint you've heard everything they are going to do . . . and the three bonus tracks mean this not only outstays its welcome but erodes the good work done.

US Girls; Half Free (4AD):  No one would claim this is an easy ride from American Meg Remy who can vocally channel the spirit and sound of Darlene Love, Ronnie Spector et al but delivers over churning beats and stabbing electro while telling stories of a woman who learns her lover has slept with her sisters, interjects a recorded phone call about nude photos of her as a kid ("I was kinda hot") and generally stalks around in a post-therapy world of bad doings and emotional damage. She mixes things up with some electro-ska and even a touch of broody disco, but for the most part this is an invitation into her world of noir-stories which, while demanding, can sometimes really pay off. Is you 'are enuff, bra? Try this . . .

Red Comes in Many Shade

The Bottle Rockets; South Broadway Athletic Club (Bloodshot): The long-serving Rockets give crafted Midwest rock'n'roll a good name -- imagine the Mavericks with more punch and road mile dirt -- and once again deliver honest, Satruday night rock with a little country and plenty of blue collar earthiness (the political Building Chryslers where they nail down a harder and more gritty sound). Reliable, instantly familiar in a good way and a play-loud party soundtrack while clinking glasses. The thinking/drinking person's album. 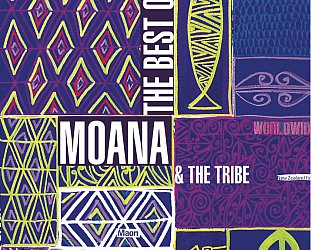