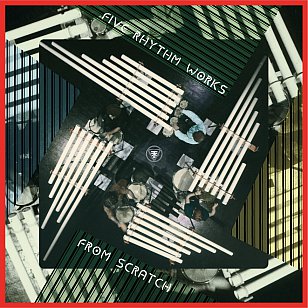 Although not strictly the reissue of a specific album, this collection put together (with approval) by a Japanese enthusiast and with excellent liner notes by Andrew Clifford picks up five pieces by this seminal New Zealand percussion ensemble.

With the exception of an out-of-print CD reissue of Pacific 3,2,1, Zero and Eye/Drum and perhaps the odd vinyl album turning up in secondhand stores, the innovative music of From Scratch in the Seventies and Eighties is not easy to find.

This collection has two pieces from the album From Scratch Perform Rhythm Works of '79 (Out In Part 1, Drumwheel Part 2), two pieces from Gung Ho (originally releasd in '83) and a previously unreleased piece from '75 recorded for radio (Passage, featuring oboe and saxophone).

The latter piece is the ensemble's earliest recording and by virtue of it not being entirely all-percussion as on the other pieces (albeit tuned percussion) it illustrates how musically flexible and exploratory the group could be, even from the start. 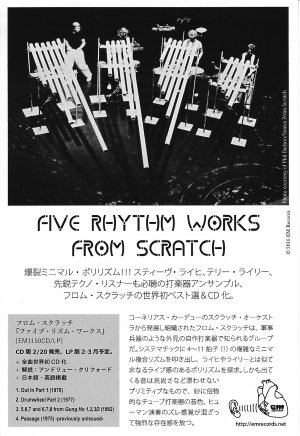 Refining the performance group down to three or four players during their most visible period -- Geoff Chapple, Phil Dadson, Wayne Laird and Don McGlashan -- perhaps has lent a skewed rear-view idea of the group as playing mathematically complex rhythmic pieces.

While that is true -- there is ample evidence of that aspect here -- the flexible line-up (especially from the late Eighties and beyond, as on the excellent Songs for Heroes from '92 and reissued by Rattle) always allowed for other possibilities beyond their famous PVC pipes hit with Jandals.

So the 11 minute-plus Passage may come as a sonic surprise to some for its quirky, jazz-like angularity in its closing overs.

In a clever cover which references the group's geometric arrangement of instruments on stage as much as the mathematical precision the music required, this series of focused snapshots of From Scratch remind again what a fascinating concept they were, as well as an ensemble which brought avant-garde music to mainstream attention.