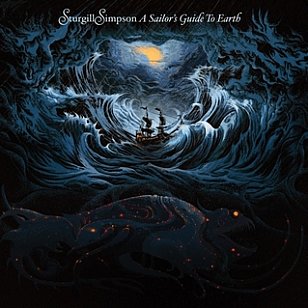 There is a very special and comfortable place in Heaven for the best country-soul singers, those with the gift of bringing a soulful voice to country music tropes, sometimes touching a little r'n'b with jazz phrasing or saxophones.

In the Sixties a lot of this stuff was pouring out of the South, and Simpson from smalltown Kentucky -- who played bluegrass and moved to Nashville four years ago – has already had his armchair in the afterlife assured on the strength of about half of this album.

It's a daring man who can make over Nirvana's In Bloom into an expressive country-soul ballad and a more rare one who can pull it off this well. He find the lonely ache in “don't know what it means to love someone” as a black soul singer might.

With the cover instruction “to be played at maximum volume” this, his third solo outing, is a song cycle of sorts about departure and a man (a seaman, but you could read touring singer, and he's been both) leaving his family behind to do what he needs to do.

He kicks this autobiographical collection into life with the opener (“sometimes Daddy has to go away . . . when I get home it breaks my heart to see how much you've grown”) which punches hard with Memphis soul-styled horns at the midpoint and has an in-built call-and-response with multi-tracked self.

And he has the Dap-Kings on call for some of this.

There's a much Marvin Gaye and Stax here as there is early Charlie Daniels and Waylon Jennings in these songs, although sometimes you can also feel that goodtime vibe of Jimmy Buffett . . .

And that's when you start to hear just how retro (late Sixties to late Seventies) this is, and how too often it throws styles into the mix as if to make a point about his inclusiveness.

Sea Stories for example starts to sink under the weight of its many references. And you do wonder if the chugging Southern stoner rock of Brace for Impact/Live A Little -- think Atlanta Rhythm Section -- might have been edited out for the sake of a more consistency of tone.

So much so that the pared back In Bloom afterwards – delivered with Jennings' baritone assertion in places – comes as quiet a relief.

Not what you ever thought you might say about that song.

The angry Call to Arms at the end – a rage about the wars and battlefields which America demands its men and women populate, and how we look away into our phones and there's “bullshit on my TV” – sounds like Bob Seger-gone-rock'n'soul.

It's a killer, but it sounds detached from the overarching theme, like a tag-on.

This is at it best – and its best is strikingly good – when Simpson keeps his ear on the Southern country-soul which is his metier. Although the cello-coloured ballad Oh Sarah sounds like a heartfelt open letter to his wife at home.

As a personal project this is doubtless a win for him (in that he pushes wide his parameters), but by the close of play you might consider a draw.

Win-win with turtles all the way down for me. IMHO album of the year. Challenging for some, metamodern for others perhaps.