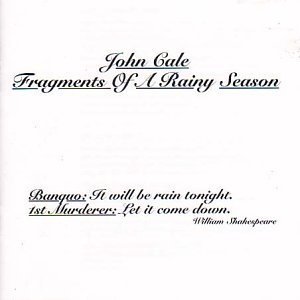 Last year a great wedge of Lou Reed's solo albums from the Seventies and Eighties were reissued, 17 CDs in a box set between his self-titled outing from early '72 through to Mistrial in mid '86.

You'd think this would have been an opportunity for a reconsideration of his work and to elevate it. But most critics were scratching for something to say about these albums which slewed from the exceptional through the patchy to the tedious.

You wouldn't be quite so indifferent about his old sparring partner in Velvet Underground, John Cale.

In that same period Cale released demanding and sometimes scary rock albums, co-wrote with minimalist Terry Riley, had the Royal Philharmonic on The Academy in Peril ('72), appeared with Brian Eno and Phil Manzanera (among others), covered Heartbreak Hotel turning it into a disturbingly funereal ballad, offered a scary live album Sabotage . . .

Cale has been reissuing his albums in a piecemeal fashion, but he does more than just have them remastered.

For last year's reissue of Music For a New Society from '82 – which contained Chinese Envoy and I Keep A Close Watch – he went back to the original material and completely overhauled many of the songs for an extra disc entitled M.FANS. The original was extraordinary enough but M.FANS took the music into new dimensions. It includes a lovely version of Chinese Envoy with strings too.

His '92 live album Fragments of the Rainy Season by being so elemental – just Cale on piano or guitar – offers fewer opportunities to rethink and recalibrate the songs, but it remains a remarkable document of his “hits” delivered in a live setting.

He does however re-jig the running order of the original album for the new edition, opening with his settings of three pieces at piano by his fellow Welshman Dylan Thomas (On a Wedding Anniversary, Lie Still Sleep Becalmed and Do Not Go Gentle into That Goodnight).

By doing so and shifting other songs in the subsequent playlist Cale reminds you of his roots and the poetic spirit that impels him. A few songs later he offers his own A Child's Christmas in Wales then it is Darling I Need You (“where were you when I needed you to see me through?”) and his bruising Guts about former friend Kevin Ayers (“the bugger in the short sleeves fucked my wife . . . and split”).

In this reconfiguration the arc of the album has a more autobiographical quality than the original, but as with the first version it ends with Cale's glorious version of Leonard Cohen's Hallelujah.

Cale was the first to cover this classic – he edited it right back to verses which he could connect with – and later Cohen, and Jeff Buckley, would refer to this version. 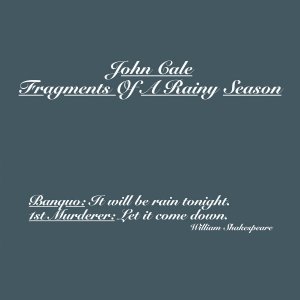 After the more harrowing material which has preceded it (Fear, the bleak Heartbreak Hotel), the final songs – his gorgeous I Keep A Close Watch, Thoughtless Kind (“the bright lights in the eyes of the ones we love . . . the scars of imagination”) and Hallelujah – act as some kind of restful place of redemption.

The extra disc offers eight outtakes, among them I'm Waiting For the Man (with the crowd clapping along) and four with strings: an especially bruising Heartbreak Hotel, Fear, Paris 1919 and the wonderful, poetic Antarctica Starts Here (not on the original album).

Across these two discs there are some often unfathomably deep lyrics, some of his best songs to that time (Chinese Envoy, Close Watch, this piano version of Fear remain cornerstone recordings) and an artist prepared the strip down to his battered soul in the service of his songs.

For more on John Cale at Elsewhere including an archived interview start here. 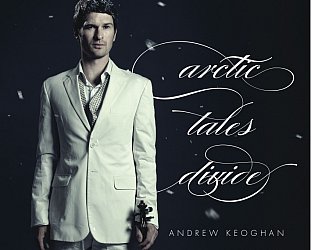