The self-titled 2005 debut by these old hands -- singer-songwriter Dave Gonzalez from the rockabilly outfit the Paladins, and guitarist/accordionist Chris Gaffney from Dave Alvin's band -- sounded somewhere between Waylon's wobbly warble and Willie's languorous delivery, and their album came with impeccable credentials: it was produced by Dan Penn and had his longtime pal Spooner Oldham as a guest (the guys who penned tracks like I'm Your Puppet and Cry Like A Baby, and who just picked up the Mojo magazine Roots award).

It's a great album and you should check it out.

This follow-up doesn't quite have the same frisson of surprise and instant charm, but there are more than enough standout tracks to welcome it to the Music From Elsewhere page.

This time out Gonzalez and Alvin -- with band, again produced by Penn -- once more deliver their brand of Western Soul, offer treatments of Cry Like A Baby (not quite as energetic as that by the Boxtops as you might guess), Penn/Oldham's It Tears Me Up, and soul legend Gamble and Huff's Cowboys to Girls.

There's also some retro Elvis-like rock with a bit of accordion thrown in (Bill Justis' Rebound), an original which is a gift to any Irish folk singer (If Daddy Don't Sing Danny Boy) and some gentle rockabilly twang (Different Today).

The Hacienda Brothers make it all sound effortless, the album will appeal to anyone who likes both Al Green and Willie Nelson, and they offer easy on the ear listening which also runs to some pretty deep emotions.

I really rate both these albums.

I'm listening to the second one right now.

I've got 17 Al Green albums,and regard him as the greatest living soul singer...You are spot on with your linkage.

Listen to the rubbish that is NZ radio,where the programmers are indoctrinated into repeating the same limited collection of songs over and over..The local Radio station has a country program but the presenter as always is an insular no-knowledge twit playing to an audience of indoctinated zombies.

There are alot of conservative people out there who would really like these albums...but where are they ever going to hear them ?Inevitably the man in the street who professes a like for country music names five artists out of a total knowledge base of ten.

There are no reviews of the Paladins on this website.....

Now the Paladins are not just Rockabilly...They are also Surf,Blues and Country.

I imported two copies of the Paladins DVD from the UK,just in case one wore out.

My favourite tracks are the Blues numbers with Dave G doing the extended guitar work. 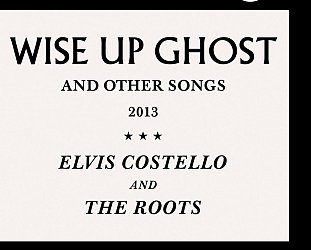 Elvis Costello and the Roots: Wise Up Ghost (Blue Note)

Even in Elvis Costello's unpredictable career (rock and country to string quartets, soundtracks and and music for a ballet among many other things), this album with the American hip-hop outfit... > Read more