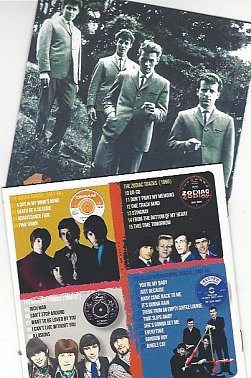 While talking with a friend, who knows a lot about all kinds of New Zealand music, we agreed that not every local band was great and not every album a Kiwi classic.

Yes, we had some excellent musicians, and even many great ones, but often the vehicles they had – the band around them, their singles and/or albums – were unworthy vehicles.

That said, of course the music should be widely available (Elsewhere doesn't have a lot of time for that DJ mentality of the more obscure the better) and it's pleasing to see more and more New Zealand music from the vaults appearing on Spotify, artists getting their due on the ever-expanding audioculture (“the noisy library of New Zealand music”) and through reissues.

One of the most assiduous researchers and reissue people is Grant Gillanders who has for more than a decade – for little if any recompense – compiled or reissued albums, mostly of bands in the Sixties.

His catalogue of releases is vast (check the Facebook page here) and he barely gets one or two out than he's got another couple in the pipeline.

His vinyl releases are especially classy and the CDs come with liner notes, biographical details and artwork and photos from the period.

The core of the Four Fours formed in Tauranga as an instrumental outfit, got into vocals with the arrival of rhythm guitarist Dave Hartstone who – with guitarist/singer Bill Ward – wrote original material.

On the Complete Singles collection (26 tracks!) you can hear the early influence of the Shadows, then the Searchers/Merseybeats and then toughening up (She's Gonna Get Me on '64, It's Gonna Rain in '65), possibly because of playing in popular Auckland clubs like the Monaco and Platterack (their terrific fuzzed-up version of the Shadows' Stingray and tough pop of Go-Go (both in '66). They embraced the folk-rock ballad style (Time Slips Away in '65), the Monkees' pop twang (Baby Come Back to Me) and West Coast Beach Boys-pop (their cover of Brian Wilson's surf-rock Hawaii).

Very much a band which followed trends but was extremely proficient musically.

Drummer Maurice Greer (who played standing up) replaced Trevor Spitz in time for the support slot on the Stones and Searchers tour in early '66 and then they headed of for the UK on the Fairsky, but that required a new name and so . . .

Human Instinct – who recorded for Deram and Mercury in the UK – emerged, as collected on the first third of the 25 track second compilation here (the others are selected Four Fours tracks which appeared on the previous disc).

The early whiff of psychedelia is discernible on the excellent A Day in My Mind's Mind, the bleak Death of the Seaside and hippie Renaissance Fair (with the London Symphony Orchestra!).

Human Instinct may have also ridden the current trends but these songs have the grit of originality within the genre, although Rich Man summed up their situation: “We're hungry, out of work, no money, I cannot pay my way . . . I might as well just stay in bed”.

They struggled on looking for that elusive breakthrough hit and it didn't come so they packed it in and came back home, disappointed.

They went their own ways . . . but then around Greer another and even more famous Human Instinct emerged with guitarist Billy TK.

But that's another Burning Up Years/ Stoned Guitar/Pins In It story.

And then there was another story again after TK left . .

The pop of the Four Fours is enjoyable enough in a very time-locked way, but the more ambitious UK music of Human Instinct at the start of the second of these collections is very much worth hearing.

Pop to rock and back home . . . as a power trio, albeit briefly.