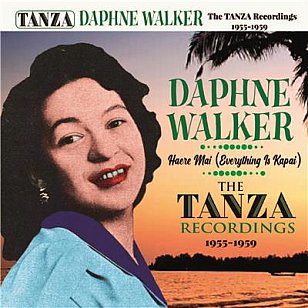 Daphne Walker might not have liked some of what she sang (notably the ever-popular Haere Mai (“everything is ka pai”) or even the songs of Sam Freedman which he gave her, but the effortless purity of her voice sold them in the Fifties when she was backed by the bands of Bill Wolfgramm and Bill Sevesi.


The style of the era was Hawaiian tropical warmth and that is what Walker conveyed on songs like the American-penned The Moon of Manakoora, the new standard Let Me Hear You Whisper (with Wolfgramm's Islanders) and popular Pasifika songs like Tahi Nei Taru Kino.

Some of the material given her (Freedman's When My Wahine Does the Poi and An Okey Dokey Hut) are lesser vehicles but for every one of those there is something as romantic as Freedman's Aroha or as sentimental as his Christmas song Best Wishes.

Pixie Williams might have got there first with the Ruru Karaitiana Quintette and Blue Smoke -- the first TANZA label release (To Assist New Zealand Artists) -- but Walker with Wolfgramm and His Islanders on South Sea Rhythm she could claim to be on the first locally produced TANZA album, albeit a 10'' compilation.

Walker recorded more than 30 songs for TANZA and this collection pulls together 30 of them where Hawaiian or Maori themes are prominent.

These songs come from a more poised and quietly sophisticated era, when the Hawaiian/Pacific sound conjured up a warmly welcoming place of hula girls and the South Seas.

Certainly a few sound a bit odd to contemporary ears (dinner on Maori Style, Lonely Kiwi) but mostly this album – compiled by Grant Gillanders and Michael Colonna, the first time these songs have been available on CD -- transports the listener into a now-distant period courtesy of songs rarely break the three minute mark and float on the seductive sound of steel guitar.

Expat Mason was bassist in the Kiwi punk band Kill the Fake Patient (2005-07) but clearly the Northern Hemisphere has blown a new wind through him: he's now an acoustic/alt.folk singer living in a... > Read more

As those who have followed Elsewhere would know, we here have long been interested in -- and have written extensively about -- "world music", long before many others. In fact, a quick... > Read more